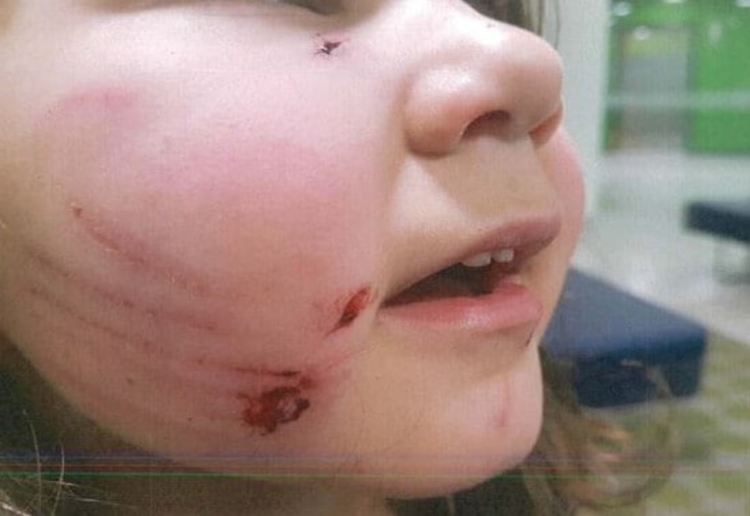 A mum has shared her horror after her three-year-old daughter was attacked by a dog while in the playground of her childcare centre.

A Melbourne mum has spoken out about the growing danger of dog attacks on children after her three-year-old daughter, Daphne, was scratched and bitten by a dog while in the grounds of her childcare centre.

Daphne was sitting with other children on the lawn of the Abbotsford Convent early learning centre when a dog walker passed, calling out “doggie, doggie” to the children, encouraging them to pat them.

The woman was walking two dogs on the publicly accessible lawn, one which resembled a Staffordshire Bull Terrier and the other which was large and wiry-haired.

“The children weren’t trying to play with the dog or trying to pat the dog or anything,” Denise said. “The dog walker just walked straight up to children before anyone could stop her. I understand that accidents can happen with dogs, but this could have been avoided.”

Before the teachers, who were supervising the children, realised what was happening, the smaller dog scratched Daphne numerous times and bit her near her mouth.

“It could have been a lot worse and thankfully the dog didn’t attack her eyes or her lips,” Denise said. “I don’t think it would have happened if the owner had been walking the dog or if someone with training was walking the dog.”

Denise highlighted the growing risk of dog attacks as a result of a booming dog walking industry, with many employees untrained people who are unfamiliar with the dogs they are looking after.

“My thinking is that because dog walking is probably one of the easiest jobs you can get, the dog walker wanted to make money but didn’t necessarily know what she was doing,” she said.

It seems that experts agree, with Tasmin MacLennan, owner of Paws Outdoors, frustrated by the lack of education and training many dog walkers have.

“The consequences can be dire – not just for children, but also members of the general public and other dogs,” she warned.

“Certified handlers such as myself would not put dogs in any social situation where other people or dogs are at risk.”

Thankfully, Daphne has recovered from her injuries with no permanent damage but her story is a reminder of just how unpredictable animals can be with young children if not supervised properly.

Has your child been injured by a pet? Share your story in the comments.

Pet Owners Divided Over Bunnings Dog Rule
This Dad Trained His Dog To Make His Daughter Do Her Homework
Territorial Dog – Please Help!!