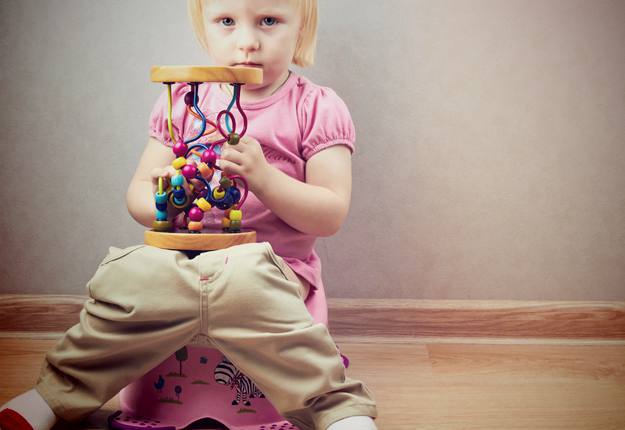 Toilet training is something we all need to face as parents.

At some point, your baby is going to go from nappies to using the toilet and it doesn’t always happen as easy as you say it.

This is one of those simple things in life which ‘sounds simple’ but can get very complicated and overwhelmingly frustrating for everybody.

I have to confess that I do not remember having too many hassles toilet training our two kids (who are now 4 and 2) – it wasn’t really that long ago, but I honestly don’t remember the ordeal as clearly as I should. People ask me, ‘how did you do it?’ and I say ‘um, I don’t know. . . it just happened’

There were never any BRIBES

There were never many ACCIDENTS

There was never a –stop-start-relapse-stop-abandon-start- process

It just happened. Both around their 2nd birthday.

Since I have one boy and one girl, you would think I could differentiate between the two as labelling one harder than the other, but again, I don’t think it was that big a deal. I wonder, do we get a little bit caught up in making it a big deal?

I avoided sticker charts, fancy pottys’, treats, lollies, trips to the ZOO! (OK – I don’t know anyone who’s actually done that)– but that’s the extreme emphasis I see surrounding toilet training and I want to simplify it for people who are struggling or wondering how in the world you do it successfully!

Racking my brain, trying to dissect the fading memories, I can put what I did into 5 simple steps:

You and your toddler can learn together to do anything, if you apply consistency, offer direction, guidance and demonstrate positive examples. Children are teachable, if we offer good teachings.

I will break those 5 simple steps down into more detail:

Make a confident decision that YOU are ready to toilet train your toddler (based on the impression that you feel your toddler is ready to follow your lead).

This is not about letting the toddler decide for themselves.

Quite often they will want to remain in their ‘comfort zone’ which is continuing to do what they’ve always done, (which is freely go at anytime, anywhere, in their dacks!) the very thing you want to move away from.

You, as their parent /carer are there to lead them, show them and help them to become independent.

Think about when you (as an adult) have been required to make lifestyle changes. You don’t always ‘feel’ like applying what you know, because it’s ‘easier’ to stay the same in your old ways.

If we based our lives around our feelings we would end up a mess of confusion (because our feelings are so up and down). Sometimes you don’t ‘feel’ like doing something, but you know you have to do it.

We need to teach our children this self-discipline.

The whole toilet training saga is a process. You will not just decide today that you are going to begin and then expect it to be done tomorrow.

You need to take action, beginning right where you are. I found the following routine useful from about 21 months of age. . . every night before their bath, I would encourage the kids to get undressed and sit on the toilet, not a potty – the toilet (We had a special seat for this).

So they sit up there, all by themselves and I tell them it’s a good idea to do a wee in the toilet before we get in the bath. (Sometimes I would do one before them so they saw what I meant).

They didn’t wee, at first, or second or the sixteenth time they tried this. . . but we kept doing it and one day, unexpectedly, some wee trickled into the toilet, so I became a trumpet of ‘first time wee in the toilet EXCITEMENT!’ gave them a high five and let them flush.

The most important thing is to be consistent. If you want them to be wearing undies, then don’t put a nappy on them ‘sometimes’ ‘when it suits you’. (I’m against those pull-up training pants too, they’re just a fancy nappy).

The child will get confused. You are trying to teach them that going to the toilet is their only option. If there is an ‘easier’ way, they will use it.

For us – the toilet is our only option. We have no choice. Neither should they.

Try not to make this a daunting law-abiding experience.

If the child feels pressure to go to the toilet and like that’s what they have to do to be loved around here – then they will rebel. Just for the simple fact that they are human and that’s what we do.

If you ask them do they want to go to the toilet, respect their answer.

Don’t second guess them, (unless you see signs of fidgeting, then you can ask them why they are playing with it or tip-toeing their feet, to which they might conclude they actually DO need to go).

If they are confident they don’t need to go –respect that, say ‘ok, you tell Mummy when you need to go’. By doing this they become empowered to make their own decisions and ultimately, become independent.

When they wee in their pants and create a sopping wet mess for you to clean up, right after you’ve just asked them did they need to use the toilet, don’t get frustrated, don’t show disappointment or don’t feel like you should just give up with the whole idea.

Teach them; they made a mistake, a bad decision, help them acknowledge that they need to use the toilet when they feel the urge and move on to hopefully learn next time they will tell you when they’re about to wee.

But it doesn’t need to be a long drawn out back-step / front-step / side-step / round in circles – process. . .  it is a step-by-step, simple part of growing up. And when they move from thinking ‘I can’t do this’ to ‘I am doing this’ there is no looking back.

Each step they conquer will boost their confidence to continue with the journey.

When there’s one wee or poo been deposited into the toilet – that should be enough evidence to let them (and you) see that they ARE capable of using the toilet (just like you and I).

The fact is, they JUST DID!  If it’s a positive experience, they’ll remember that and remember the feeling of accomplishment for next time. I don’t believe there should be bribes or prizes. The ‘reward’ at our house was the privilege of flushing the toilet.

If there was activity, they were allowed to flush. If there’s no activity – they walk away, knowing they can come back and try again later (all the while, anticipating the thrill of flushing the toilet! Or getting a high five!). Real and Simple.

I understand that some kids are not so co-operative when it comes to making changes. Different things work for different people. But taking it back to the fact that we are all human, we eat and . . . well . . . you know . . . the same way. It shouldn’t really be that hard or complicated or wearisome.

Remember . . . they’re growing up, becoming independent and learning to do what grown ups do. They’re not learning rocket science.

They are no different than anyone else who has ever lived before them. It’s just something that we do. We use the toilet.

If you can emphasise that going to the toilet, instead of in our nappies, is what we are going to do from now on. . then your child will admire your leadership and endeavour to meet your expectations.

High fives all round!!

I won’t say “good luck” at this point. I will instead pray that you have wisdom and an enthusiastic child to put the above simple 5 steps into practice.

Love to know what worked for you!