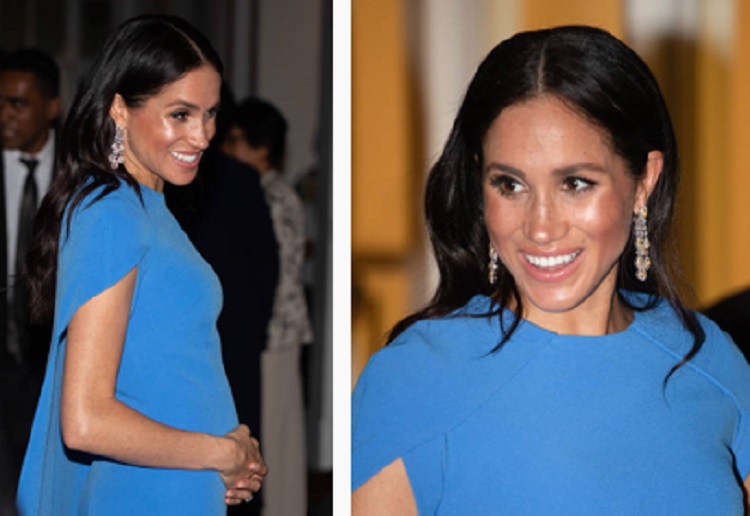 The pregnant duchess has been criticised for holding her baby bump too much.

Duchess Meghan Markle made a surprise appearance at the British Fashion Awards on Monday night, where she lovingly cradled her baby bump throughout the evening.

The Duchess wore a black gown and had her hair tied into a sleek bun at the event where she presented the award for British Womenswear Designer of the Year to Givenchy’s Clare Waight Keller – creator of her stunning wedding gown.

Although the sweet snaps of the Duchess have captivated fans, there’s been an outpouring of criticism from trolls on social media because she held her bump for so long, shares The Mirror.

One wrote on Twitter: “#Meghan. We know you are pregnant. You can stop holding onto the bump with both hands now. It won’t fall off.” Another said: “Meghan Markle needs to desperately stop holding her baby bump because it’s not as if everyone doesn’t already know”. “If I see one more photo of Meghan Markle cradling that bump I am going to vomit. I swear she and Beyoncé think they are the only women in the world to get pregnant. You are pregnant……WE KNOW!”, a third said. Despite so many trolls slamming the Duchess for her motherly behaviour, plenty of people rushed to her defence.

One said on Twitter: “Don’t even waste ur time arguing with ppl attacking Meghan for something as normal and precious as cradling her bump. The fact that they’re even attacking her in the first place tells you they’re a lost cause so”.

Another agreed: “People are really mad that Meghan Markle was holding her bump in a photo? Wow.”

A third said: “why does Meghan holding her baby bump bother so much people? why do you care? you’d think it was a crime that’s she’s touching HER baby bump. she’s so warm and attentive all the time, its obvious she’d be that way with a growing baby inside of her”.

Seriously? How does that bother anyone?