Article Video of Man Shoving a Child Divides the Internet 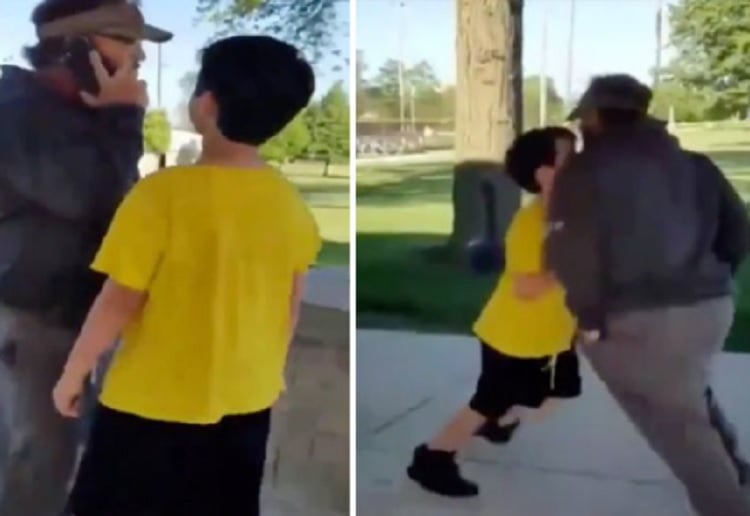 Footage of a man pushing an aggressive young boy to the ground after he was taunted and punched has spurred debate as to whether he was within his rights to do so.

Filmed at an undisclosed park in the United States, the 10-year-old boy can be seen trying to get a reaction from the park manager, screaming and swearing as onlookers watch on.

It’s understood the man filming the incident had been driving down the street when two boys on bikes cut him off. When he told them off, they reportedly started throwing rocks at his car.

“The man went to the concession stand (of the park) and found the guy who is the park manager and asked him for help,” said the background statement shared online.

“The park manager told the kids to leave and they started swearing … then left for a minute down the path, threw down their bikes, and came back for more.”

The manager can be seen making a phone call asking for assistance before eventually using enough force to push his way back to the park stand.

It’s at this point the boy starts throwing more punches but this time, the manager’s patience has worn thin. He grabs the boy by the throat and tosses him to the ground.

From what I’ve read (not confirmed), kid was messing with cars, guy confronts him, kid acts tough, and this happens…… pic.twitter.com/HOfhbOJE7I

After letting out a deafening shriek, the boy then takes aim at a female bystander, saying it was “child abuse” before going on another profanity-laden rant.

The vision, which has been viewed more than five million times, has seen social media users divided.

The post stated that police attended the scene after the incident and watched the footage, asking the park manager if he wanted to press charges.

A discussion on Studio 10 also found the hosts were divided over whether or not this was OK.

Do you think the man went too far?