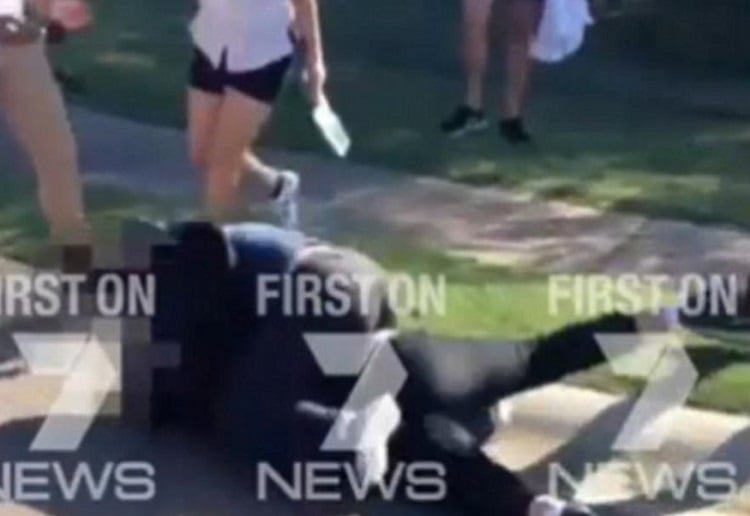 7 News reports the violent display took place shortly after the students, believed to be from a school in Campbelltown, left class.

Police say about 5pm on Wednesday February 10 officers were called to Jiniwin Place, Ambarvale, after they were notified of a number of teenagers fighting.

Officers arrested one teenage girl who was taken to Campbelltown Police Station and charged with affray, assault police and resist arrest.
Police said a number of teenagers were spoken to at the scene of the brawl. Police have charged a 17-year-old girl.

“Inquiries into the brawl are now underway and police are keen to hear from anyone who witnessed it,” a police spokesman said.

It’s alleged up to five people were involved in separate fights with more than 30 people watching.

Police said a number of weapons were brought to the location, however they were not used in the fight.

No one was seriously injured.

WARNING: Some people may find this video disturbing.

In the footage, a teen can be seen holding a long carving knife in one hand and a large meat cleaver in the other as she approaches another young woman who is holding a baseball bat.

A resident confirmed to 7 News the brawl took place behind the high school.

The violent onslaught does not stop until other students see the victim stumbling and call for the alleged assault to end.

The video quickly gained attention on social media but was taken down shortly after it was live-streamed.

Police are urging anyone with information in relation to this incident to call Crime Stoppers on 1800 333 000 FREE.