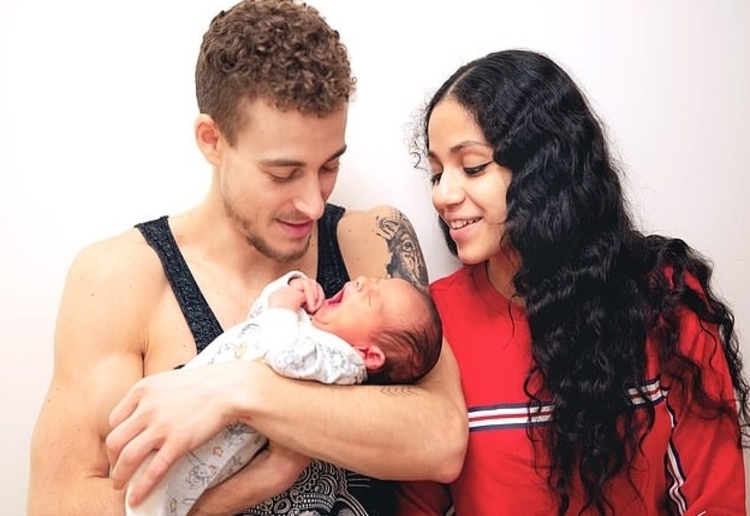 The 24-year-old gave birth to the surprise baby by herself in the bath at home and didn’t even know she was pregnant until she saw the head!

UK mum Charlotte Dubard got the shock of her life after giving birth alone in the bath to a surprise baby. The 24-year-old had no idea that she was pregnant until she saw the baby’s head despite gaining over 5kg and developing unusual cravings in the months prior.

Charlotte was at home when she felt sudden pains in her stomach, deciding to investigate what was happening using her iPhone camera, and was shocked to see her baby’s head. Charlotte went through the labour at home in the bath, without any pain relief or assistance, and cut the umbilical cord herself with nail scissors before ringing her boyfriend Miguel to ask him to come home urgently. “When Miguel came home he screamed ‘O my God you found a baby in the street!'” she said. “I started bawling and said ‘this is ours’, he was in shock. Neither of us could believe it was ours. It was the most mysterious thing.”

Charlotte said that, upon reflection, she had definitely experienced some pregnancy symptoms. “In hindsight, I was craving a lot of sugar and did also have a problem with my leg which meant I had to be off work for a week,” she told The Daily Mail. “The doctor says it was probably the pressure from the baby.” If that’s not the biggest surprise you could possibly get in the bath, we don’t know what is!

Charlotte admits that she was surprised to have such a healthy baby as she continued to smoke, drink, work and take the contraceptive pill throughout her pregnancy. “I call him my miracle baby because he is so healthy after all I put him through,” she said. “Also, so many things could have gone wrong with me giving birth alone, but it all went remarkably smoothly.”

This story definitely serves as a reminder to always expect the unexpected! We’re just glad that Charlotte, Miguel and bub are all doing well and this story has a happy ending…