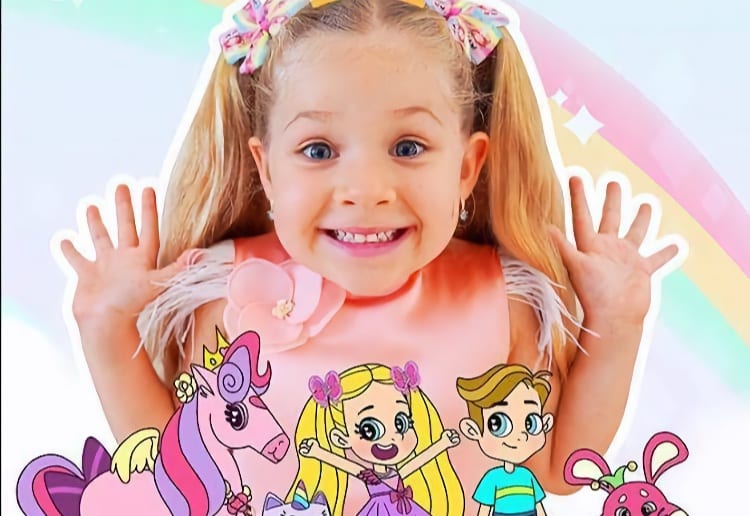 The mega-successful six-year-old Ukranian sensation Diana appears in Youtube videos playing with her family and friends. The Kids Diana Show is currently the third most watched YouTube channel made for kids in the world with a staggering 148 million subscribers and over 70 billion lifetime views since the first channel launched in 2015.

Kids Diana Show’s meteoric rise most recently captivated over 40 million monthly viewers in Australia and over 7 million in New Zealand in August. The entire network of channels starring Diana, translated into nine different languages including English, generated over 5 billion views in August alone.

Diana regularly takes viewers on surreal, playful adventures bursting with colour and imagination, along with her brother Roma, 7, and parents Olena and Volodymyr. Fans of the Kids Diana channels will soon see the new Love, Diana brand come to life, with elements woven into the Kids Diana Show channel, creating a more diverse video experience.

So just who is Diana?

Well, she’s originally from the Ukraine but now lives in the US with her brother Roma, star of his own successful show Kids Roma Show, along with parents Olena and Volodymyr who don’t use their surname for privacy reasons.

Olena, who comes up with most of the video ideas, says she feels Diana’s staggering popularity is because they show Diana “as a young girl who loves to pretend play, be silly, play with her brother, and who loves her family. Diana has a great imagination, and a lot of the videos we create are born from that special place most kids love and enjoy.”

We asked Olena to tell us a bit more about her amazing daughter.

What are Diana’s hobbies?

On weekdays, Diana studies singing and music, and learns English. She also does different crafts, plays board games, plays a dancing video game, listens to audiobooks, and watches movies with the whole family. Diana loves to draw and often surprises us with interesting drawings, whilst Roma loves to build tracks for balls and cars, collect constructors. We also love to take them to interesting places, visit amusement parks, water parks, playgrounds, as well as regular places like the supermarket!

What does Diana enjoy doing the most on Kids Diana Show?

Diana and Roma love to discover new toys and like when we do something fun together as a family. We like to make videos that are interesting to our viewers and love that they appreciate what we do.

Does Diana watch other kids YouTube channels as well?

Do Diana and Roma get recognised often?

We are recognised quite often. Previously, Roma and Diana were shy, but now they are used to it. It is easy for them to make new friends anywhere. Children consider them to be their acquaintances and come up to us at playgrounds and in shopping centers. Actually, the parents often recognise them first and bring their children to say hi.

How much does Diana know about Australia?

Well she knows that it is a big island and kangaroos live there! We would all love to travel there one day, it would be so interesting to see how people live in Australia, the nature, animals and the sights.

What are Diana’s favourite toys and things to play?

Diana loves her cat very much and she has lots of different plush animal toys. She also likes to make various crafts and draw or colour pictures.

She love sweets, ice cream and cakes, but she also eats soups, cereals, fruits, vegetables, salads and fish. Although she loves sweets more.

Has she said what she’d like to be when she grows up?

Before, Diana wanted to be a ballerina or an actress, but now she wants to design houses and be an actress at the same time. Or who knows – maybe she’ll change her mind!

Diana has just released her first ever toy line just in time for Christmas.

Win 1 Of 5 ‘Love Diana, the Princess of Play’ Packs From YouTube Star Of The Kids Diana Show