Article What If Your Family Had No TV? 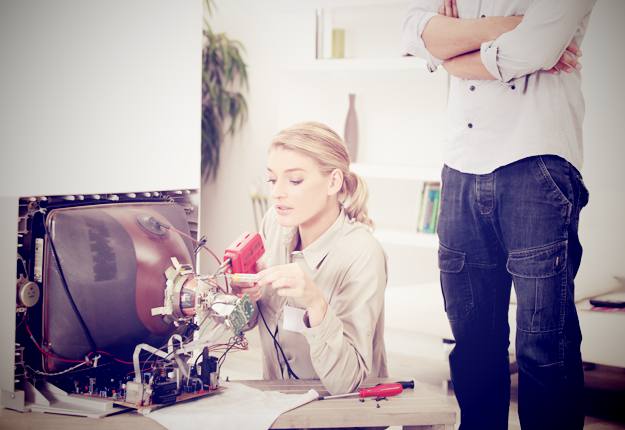 When our TV died it was an unexpected bonus for our family.

Sofia The First and Dora The Explorer were favourites of our two preschoolers. Almost as popular were the shows that preceded and followed them – Mickey Mouse Club and Spongebob Squarepants and Handy Manny. Beth (4) and Josh (2) would sit mesmerised in front of the TV for many hours each week. And to be honest, I appreciated Dora for her excellent babysitting skills. The shows were educational too, we told ourselves whenever twinges of guilt arose.

We realised something had gone terribly wrong, however, one day last November when the old television set died.

Suddenly the kids had no TV. They became quite cranky, almost like addicts in the throes of withdrawal.

My wife and I soon realised that the telly had become an obsession in their lives, and possibly ours. Like so many other twenty-first century families our family had fallen victim to digital games and kids’ TV programming.

The Negative Effects On TV

The bad effects on our kids had actually been evident for several months, but we hadn’t wanted to admit it. Probably the electronic babysitter was just too convenient. Now we had the opportunity to take stock of the situation, and as parents we realised we were not featuring so highly in our children’s lives. They were talking to us less, and finding it hard to pay attention to us. Not only that, but they were turning into mini couch potatoes, and grumbling when we suggested some good healthy exercise like going for a walk.

The kids were certainly learning something from these educational programs (at least we assumed they were) but it was passive learning. We decided the negative effects of TV were outweighing the positive…

What to do? After some discussion, we made the (for us) rather radical decision to leave the TV broken for a while.

We’d see if the family could survive the deprivation for a few months, and whether it would leave us better or worse off… We realised there would be some challenges ahead. Our budget wouldn’t stretch to a preschool, and so we’d actually have to start planning and designing some educational activities to fill the gap. And – you guessed it – Mum would need to be the chief teacher.

From a friend who was a trained teacher I’d heard about “play-based learning”. I googled the term and discovered that masses of research has been done on the subject. In fact “many believe that it is impossible to disentangle children’s play, learning and development”.

I became aware that play-based learning was on the rise, as other parents too had despaired of the culture of violent video and passive TV watching.

Within weeks I had become hooked on it. It seems so obvious to me now, but finally I was having quality time with my own children!

Learning became fun for all of us. We began to structure our day, doing the indoor stuff in the mornings when the kids and I were fresh.  We might make play dough together, and talk about why we had to put so much salt in it. They might build towers with Legos and we’d analyse why some towers were more stable than others. We might make bubble liquid out of dish detergent, and talk about what held the bubbles together while happily blowing them round the porch. We might play a simple card game like “Stop the Bus”, in which they had to count the values of the pips. We might make puppets out of paper lunch bags and decorate them to look like animals.

The internet was a mine of information when it came to suggestions for inexpensive, creative learning experiences using ordinary materials found in the home (the things you can do with egg cartons!).

After lunch the kids had to stay in their rooms to “rest” for an hour or so. They could “read” their books or do whatever quiet thing they wanted, as long as they stayed in their rooms until the little hand was on two and the big hand was on twelve (this was my sanity time).

Then we’d have a snack and go for a walk outdoors, talking about the natural world we encountered, naming the flowers, trees and birds we spotted, talking about the colours of things and even the weather, As the children and I discovered, loitering could be fun!. When we spotted a hedgehog we talked about it, and when we got home we googled it to learn more.

Well, we eventually bought another TV set. But today the rule in our house is no more than 30 minutes of TV per day.

The rest of the time we play and learn together – and we’re having a ball!

Written by Jim Kim, based on his family’s real experience.
Jim Kim is chief player of Spielgaben, re-engineered version of the first-ever educational toy developed by founder of kindergarten. Spielgaben’s sole mission is putting education and play back into the hands of parents.