By Rebecca English, Lecturer in Education, Queensland University of Technology 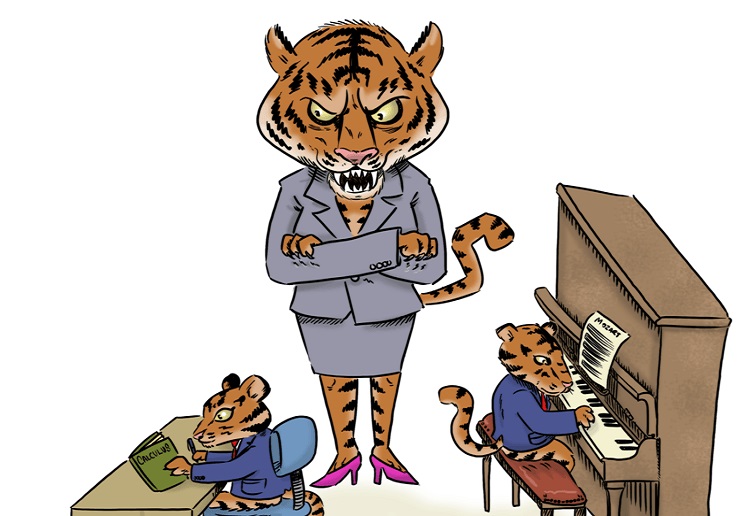 Rebecca English is a Lecturer in Education at the Queensland University of Technology. She writes for The Conversation and is currently examining some major changes in family and relationships, and how that might in turn reshape law, policy and our idea of ourselves.

What’s the best way to raise your child? Rebecca asks. It’s a question that has provoked the publication of numerous books, and seen authors race to coin the next quirky name for a new style of parenting.

Psychologists generally talk about parenting as fitting into typologies, based on the work of Diana Baumrind, a clinical and developmental psychologist known for her research on parenting styles.

So what does research say about the pros and cons of each of these parenting styles? 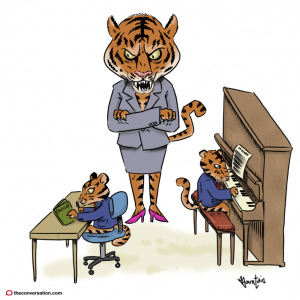 Type of parent: You expect first-time obedience, excellence in every endeavour and a child who never talks back.

Who coined it? Amy Chua popularised this name in her 2011 book Battle Hymn of the Tiger Mother. Chua describes tiger parents, often seen in Chinese families, as superior to Western parents. Chinese parents assume strength and don’t shy away from calling their children names. They assume their children owe them and expect their children to repay them by being obedient and making them proud.

Why parents choose this style: Tiger mothers are, as Chua attests, socialised to be this way by their cultural background. Thus, when they successfully demand an hour of piano practice it’s part of their cultural background that the child complies. Western parents will have a hard time emulating the years of acculturation that leads to that moment.

Parents who follow Chua may do so because they want their child to be successful. It may be these parents hold deep insecurities about the future. These parents are most likely authoritarian.

Pros: Raising a child in this way can lead to them being more productive, motivated and responsible.

Cons: Children can struggle to function in daily life or in new settings, which may lead to depression, anxiety and poor social skills. But again it’s culturally dependent. 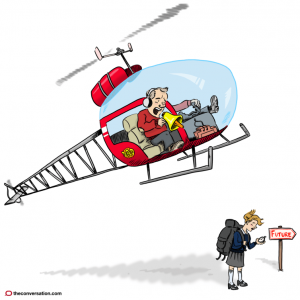 Type of parent: You step in to prevent your toddler’s every struggle; you are over-involved in your child’s education and frequently call their teacher; you can’t stop watching over your teenager.

Who coined it? Psychologist Foster Cline and education consultant Jim Fay coined the phrase in 1990 in their book: Parenting with Love and Logic. They described helicopter parents as being confused about the difference between love and saving children from themselves. Another name for helicopter parenting is “overparenting”.

Why parents choose this style: These parents are likely to be scared for their child’s future, perhaps like tiger parents. They may not trust their child’s ability to navigate the world. By hovering around they may think children will be inoculated against failing.

These parents are probably a mix or authoritarian and permissive typologies, but there is scant research on the style.

Pros: Parents can be overprotective, which may save their child or adolescent from problems they would not foresee.

Cons: Children can lack emotional resilience and independence, which can affect them into adulthood. Being a child of a helicopter parent may lead to an inability to control behaviour.

There’s even an AskReddit devoted to the worst aspects of growing up with helicopter parents. Stories include a contributor, 21 at the time, whose father followed them to jury duty, because he didn’t trust they could do it properly. It’s claimed dad had a tantrum when he was kicked out by the security guard. 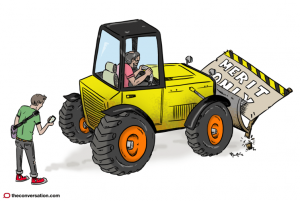 Type of parent: You push all obstacles out of your child’s way. Perhaps you’ve nagged the principal for a different teacher or bribed the coach to get your child a place on the team.

Who coined it? It appears the term was coined by former high school teacher David McCullough. In 2015, he published a book, You Are Not Special, in which he implores parents to back off and let their children fail. It was based on a 2012 commencement speech he gave to high school students.

Why parents choose this style: Maybe you think your child is exceptional, or they’re too great to fail, and that’s why you’ve identified with this parenting style. In terms of typology, there are aspects of authoritarianism in the mix as they demand success (after all, they’ve bulldozed all obstacles from their children’s path). However, they also score highly for permissiveness.

What the research says: There’s no empirical evidence either way for the snowplough approach. However, there’s a lot of blog posts and media articles devoted to the topic.

That being said, the pros and cons are probably similar to helicopter parents. These parents can help children feel safe and secure. But it may also foster a sense of entitlement or narcissism in your child. 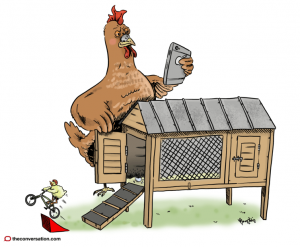 Type of parent: You believe your role is to trust your child. You equip them with the skills to stay safe, and then back off.

Who coined it? The term was made famous by a case of “neglect” against Lenore Skenazy, a former columnist who wrote about letting her nine-year-old son ride the New York subway alone. The experience led to her being labelled “America’s worst mother” and prompted her to write a book. The book was about fighting the perception the world was getting more dangerous.

Skemazy’s blog attempts to connect parents with like-minded others who agree that children need safety jackets and helmets in order to safely experience their independence. The approach is about giving children the childhoods their parents experienced in the 1970s/1980s.

Why parents choose this style: Psychologists and experts suggest this style is a backlash against anxiety-driven, risk-averse child rearing. It may be that Skenazy is right, we are worrying too much about everything from germs to other people. While Skenazy cites responses from parents (and lawmakers) who think the approach is neglectful, it is probably more aligned with the authoritative typology, where parents believe in teaching children to look after themselves.

Pros: Children learn to use their freedom, be autonomous and manage themselves. They may also be better able to handle mistakes, be more resilient and take responsibility for their actions. It’s also said to lead to happier adults.

Cons: Problems with this style centre on the legal aspects of the approach. In Queensland, it is illegal to leave your child alone for an “unreasonable” time while, in other states, parents must reasonably ensure their child is properly looked after. Queensland’s law does not define “unreasonable” time, but the parent will receive a misdemeanour (up to three years in jail) if they breach the code. 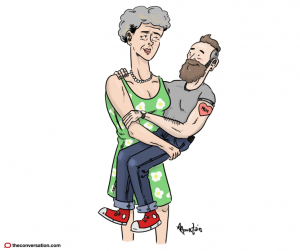 Type of parent: You believe that a child’s earliest attachment to caregivers informs all subsequent attachments a person experiences. The argument suggests strong emotional and safe physical attachments to at least one primary caregiver are essential to the child’s personal development.

Who coined it? The philosophy is based on the work of psychologists John Bowlby and Mary Ainsworth on attachment theory. The work began with Bowlby in the 1950s. Bowlby also worked with Ainsworth and Ainsworth did some famous experiments with young children.

Attachment theory suggests that children who develop strong bonds with parents/caregivers in the early years will have happier, healthier relationships as they age. The term was then popularised by a book dubbed the “baby bible” written by the Sears family in 1993.

Why parents choose this style: Parents may choose this style because they want their children to be positive about themselves and their relationships with others as they mature. Attachment parenting is associated with the authoritative typology. These parents try to balance high expectations with empathy and this is associated with the best outcomes.

Pros: It provides a safe haven of love and respect in which to build the child’s relationships and from which the child can safely experience the world.

Cons: It can be conflated with permissive parenting. It is also associated, somewhat contrarily, with over-parenting, as some suggest it is a name for mothers who can’t let their child go. Some have accused this style of being anti-women or anti-feminist. These authors say the style conflates women’s role with motherhood, undoing the work of feminism. However, others disagree.

What style of parenting do you tend to follow?