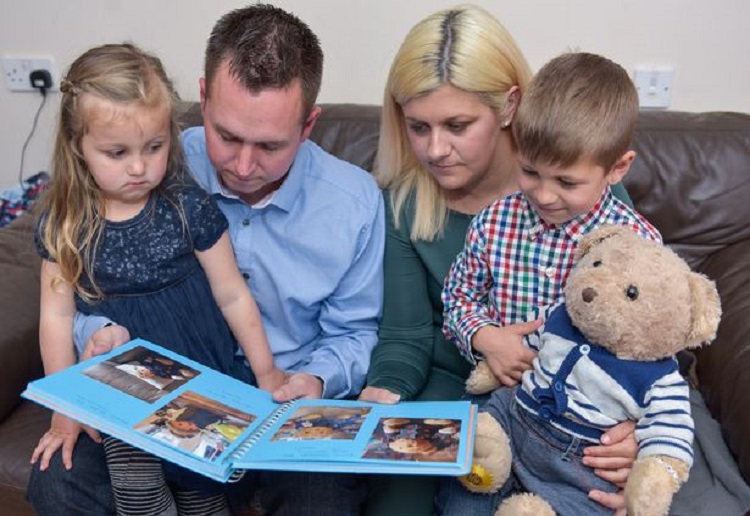 Mum and dad take teddy bear everywhere with them because it contains ashes of their baby boy they lost at 17 days old.

A grieving mum and dad placed their son’s ashes inside a teddy bear and take the toy everywhere with them after he died from meningitis 17 days after his birth.

Laura and Mark Elliott insist the teddy is helping them create memories with Cowen and their children from beyond the grave.

Laura 27, created a scrapbook of memories with the bear after her son Cowen died from a deadly strain of the illness last October.

The family outings – with husband Mark daughter, Skyla , 3, and Ethan, 6, – have included bike rides, family parties, holidays, trips to the shops and the park.

And they are all documented in the scrapbook.

The Derby couple, who have two younger children, insist it is helping them create memories with Cowen from beyond the grave.

Now, with their first abroad holiday with teddy bear, Cowen, booked, the family are looking forward to their biggest adventure yet.

Laura, a former supervisor at Starbucks, said: “Cowen the bear has been by my side ever since we lost our baby last year.

“I’ve bought a big handbag so he fits in it and we always take photos of him out and about.

“He has been on so many adventures and having him around has helped us with the loss of Cowen.

“Our daughter, Skyla , three, and Ethan, six, can now make memories while knowing their little brother is with them.

“We’ve been on so many family days out with the teddy now that it wouldn’t feel right if he wasn’t with us.

“If we are on a bike ride, going to parties or school, Cowen the bear is always there.

“Cowen the bear wears a different outfit every day and is even coming on a family holiday with us to Lanzarote.

“I started a scrap book of his adventures last year and I’ve been updating it with photos every week.

“It’ll be lovely for Ethan and Skyla to look back on when they’re older too.”

Laura and Mark were left heartbroken when their son, Cowen, was stuck down with meningitis in 2016 – at just 17 days old.

It took just three and a half hours for the illness to ravage his tiny body and despite the best efforts of hospital staff, he died on October 29.

Laura added: “Cowen had colic and was always a little restless so when he started to refuse any milk, I didn’t think anything of it at first.

“But the following morning his whole body turned grey and when I went to change his nappy, I saw the purple pin pricks on his body.

“I rushed him to hospital but it was already too late, his organs were shutting down and his heart was no longer beating.

“After being ventilated and watching the rash spread all over his body, we were told there was nothing more that could save him.”

Laura opted to have Cowen’s ashes placed inside a memory bear as she knew it would be easier for her young children to understand.

She said: “The last few months have been a complete blur but slowly we’ve come to terms with the loss of Cowen.

Such a touching story. What a beautiful tribute to a dearly loved little boy.