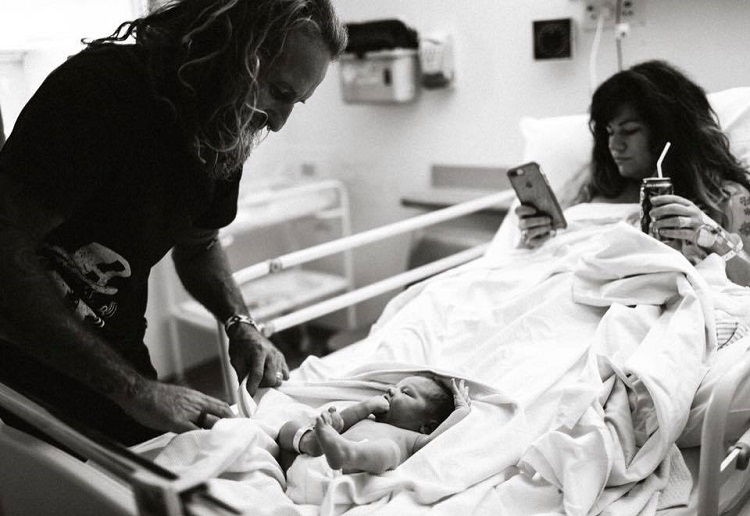 Constance Hall has hit back at ‘mummy shamers’ who slammed a photo of her taken after giving birth to newborn son, Raja Wolf.

The controversial blogger, 34, was alerted by ‘concerned Queens’ about the uproar surrounding the pic and she decided to address the issue head-on.

But can you see what they have taken issue with?

Many of her followers saw the photo on Facebook and said that it was ‘poor parenting’ for her to be on her phone and drinking a soft drink rather than holding her newborn son.

Constance soon addressed the issue saying, ‘Yesterday I posted a picture of myself on the phone the day my son was born,’ she explained underneath the image.

“And of course it was followed by a few f#ckers and their stuck up judgments about what I was doing on my phone instead of spending my every second doting and being the eternally grateful goddess mother..

“And then that was met with beautiful Queens defending me with comments like “she could be FaceTiming her other kids or family..”
I didn’t even know that any of this had happened until upset Queens were messaging me.

“The truth is…. it’s nobodies business what a mother is doing on her phone the day she gives birth, if she’s sending her children and mother photos of the baby or googling tit jobs in Thailand it’s not your business.

“In fact the way another mother is mothering…… is not your problem..

“Just to clarify for you here are 2 things that are your problems.

“1, if a child is being abused. Sexually, mentally, physically, Or neglected, starved or not having their medical needs met. By ALL means, intervene. And when I say intervene I mean… Call the department of child protective services, do NOT bitch and moan on Facebook. This is YOUR problem.

“It’s all of our problems when children need a voice and we have that voice.

“And 2, YOUR children. They are your problem, how you raise them, what YOUR doing on your phone, what kind of a mother YOU are.

“But all other aspects of mothering… Ain’t your f#cking problem.

“So thank you Queens who came into bat for me, yet it’s completely unnecessary.”