Article Why this photo is touching all our hearts 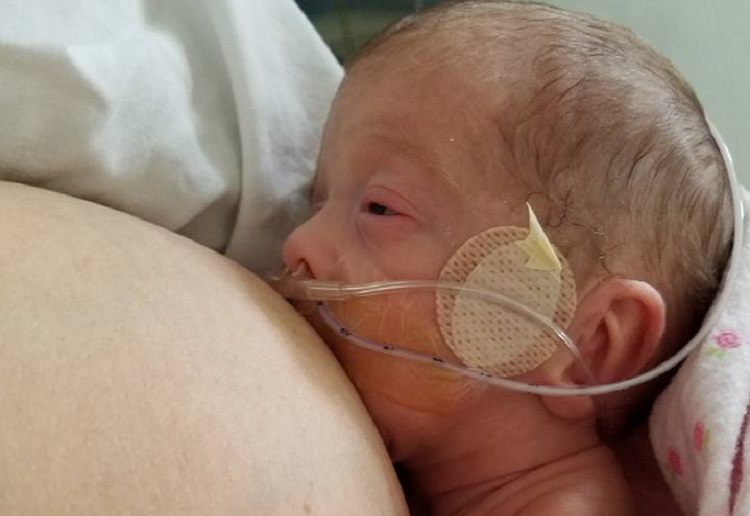 This photo is touching hearts all across the globe.

“This was me and my girl today. Our first time as well! She is 4 weeks today. Born at 28 weeks. Water broke at 21 weeks and the only option doctors gave me was termination of the pregnancy. 2 weeks of home bedrest and 5 weeks of hospital bedrest later she was born via emergency c-section due to placental abruption. Doctors still thought she wouldn’t survive because she had no water for her lungs to develop. She’s here and so healthy. Never needed oxygen. 32 weeks gestation and trying to breastfeed even though they told me she wouldn’t be able to until 34-36 weeks gestation. She’s proving everyone one wrong!”

“I knew it could only benefit her, so I pushed for it,” Keri said. “On the four-week anniversary of her birth, I was allowed to put Dahlia to my breast for the first time and she did great.”

The breastfeeding success has been a major victory for the mum. “Throughout this whole process I’ve blamed myself and felt like my body failed Dahlia, so although everything is still out of my hands, I feel like I have some control over her nutrition,” Keri explained.

After she experienced bleeding early on in her pregnancy, Keri told the Huffington Post that she was diagnosed with a subchorionic hematoma (a bleed in part of or near the placenta), which she was told had resolved at her 18-week ultrasound. Despite the all-clear assurance, however, Keri’s water broke prematurely at only 21 weeks and 3 days, a condition called preterm premature rupture of membranes (PPROM).

The image has since gone viral with over 1K shares and 38K reactions.

We hope Keri’s image gives other families some hope as well.