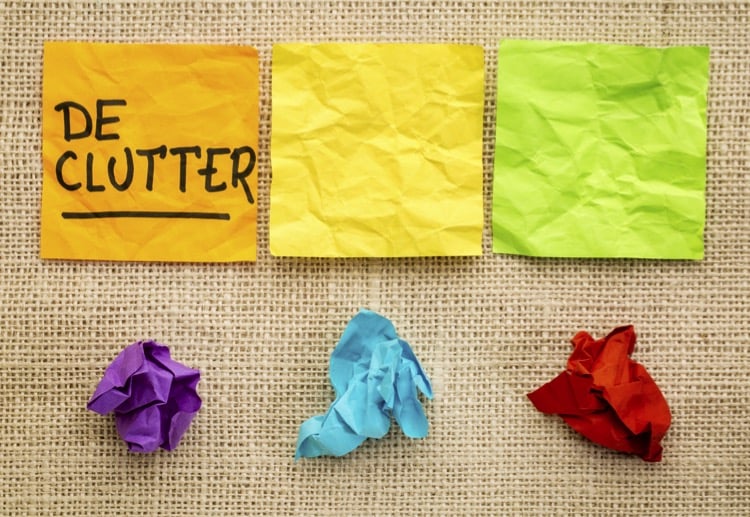 It’s a fact of life: kids love stuff. They love their own stuff, like the latest toys and gadgets, but it doesn’t stop there. They also love their parents’ stuff, their older siblings’ stuff, sometimes even stuff that doesn’t belong to anyone, like litter!

It’s very endearing, of course, but too much stuff is bad for you. It’s also bad for your house.

The difference between organising and decluttering

There is a difference, and it’s a powerful one. Basically, organising is simply rearranging the stuff you have; decluttering is getting rid of it entirely. Those old books you have might look very nice indeed neatly organised on a shelf, but if you don’t actually read them, what’s the point?

People are often told to organise their house for a simpler life, but if you have kids to think of as well this may lead to the exact opposite for you. Kids, especially young ones, simply aren’t that bothered about keeping their things in order. You’ll be forever frantically re-organising whatever they’ve been playing with that day, reordering your ornaments or re-hiding those cushions you don’t particularly like but feel obliged to keep. It’s more trouble than it’s worth, which is why you need to de-clutter. Grab those binbags and start to decide for yourself: what do you really need in your house?

Bite The Bullet And Throw It Away

There are many reasons why we hold onto things we don’t want or need but sometimes you have to just bite the bullet and really consider why you’re still hoarding things from your past that you neither love nor particularly need. Perhaps you keep things around you house because you may, you think, need them in the future – but what if you don’t, and you’re just filling your living environment up with junk for no reason?

Getting your kids involved

Decluttering 100% does not mean taking your children’s toys away! There are ways, however, of gently easing young kids into the concept of decluttering without nagging or making them feel bad. If you see a toy of theirs that was once loved but now hasn’t been touched in years, try suggesting to them that other less fortunate children will benefit from it. (If it’s still in working condition, that is.) Not only is this a good way to clean up the house, it’s a way teaching your children some very, very important skills about selflessness and giving.

When it comes to your own things – clothes, electronics, all the junk that accumulates in a house – let your children help you decide what stays and what goes. Get them as involved in the process as much as possible. One great idea often touted when it comes to house decluttering is to sort things into three piles: keep, donate or sell, and throw. Your kids may very well enjoy doing that if you approach it from an exciting “today we’re going to do something special” angle. And it goes without saying that they’ll enjoy having more space in their house, even if it takes them a little while to adjust to it.

Believe it or not, decluttering your house can increase its value by a whole seven percent! And while there are certainly other ways of adding value to your home, decluttering is one of the easiest – plus, it costs no money at all. In fact, if you’re choosing to sell your unwanted items via Ebay or similar websites, you might be able to come out of your decluttering process richer!

But there are other benefits besides monetary ones. A decluttered house is a house that’s easier to clean – thus saving you lots of time – and easier to move around in. You won’t have to annoy yourself constantly looking for things that were put down and then buried under clutter – therefore, less stress in your life. And you’re free to embrace a soothing minimalist aesthetic in your house. (Though, depending on what ages your children are, you might want to stay away from all-white décor.)

Decluttering your house is a great way of getting the whole family together to do something that benefits all of them. In the end, you’ll end up with more space, more tranquillity, and more time to spend with each other!