Article Woman Gutted She Can’t Visit New Niece Due to SIL’s “No Vax, No Visit” Rule 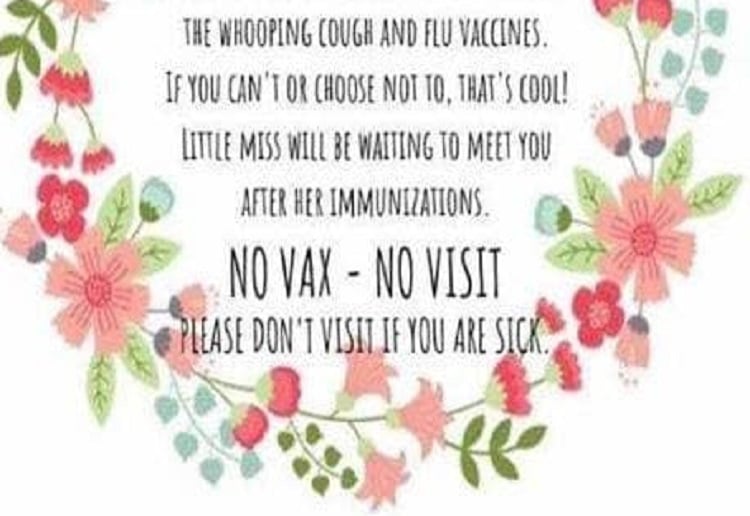 A NSW woman has sparked a fierce debate after revealing she’s “gutted” she can’t meet her new niece due to her sister in laws “NO VAX NO VISIT” rules. Do you think it’s fair?

The woman’s vent caused a heated debate online, after complaining she wouldn’t be allowed to meet her baby niece — because she refused to get her flu vaccination.

The woman posted her dilemma on a Sydney mother’s Facebook group this week, asking the members if she was being selfish by not vaccinating her family against the flu before meeting her brother’s new baby.

The woman told the group she had just received a birth announcement reminder from her sister-in-law.

The mum advised any friends and family wishing to visit the new baby to “Please see your doctor for info about receiving the whooping cough and flu vaccines”.

“If you can’t or choose not to, that’s cool!” the note read.

“Little Miss will be waiting to meet you after her immunisations.”

In large print, the message could not be clearer — NO VAX NO VISIT.

“Please don’t visit if you are sick,” it concluded. 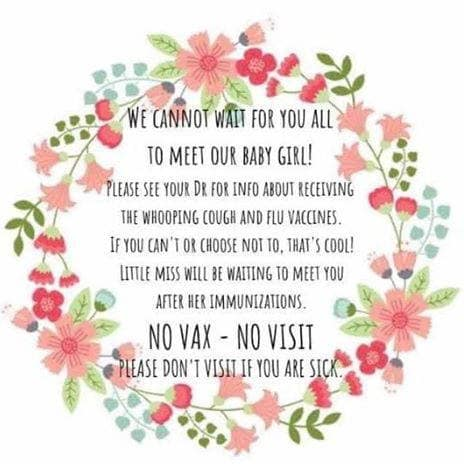 While her family was up-to-date with most vaccinations, they had made the decision not to get the flu jab this season, and she was devastated that she wouldn’t be able to meet her brother’s child for almost two months.

“I am becoming an aunt for the first time and my son is so eager to meet his new baby cousin,” she wrote.

“Now we’re being told we can’t meet (her) until the six week mark.”

She added that she understood her sister-in-law was trying to protect her new baby, she said she couldn’t understand why she was being so strict about a simple flu vaccination.

“My brother was welcome at the hospital when I had my son and held him and bonded with him,” she said.

“I feel like I should have the same experience. I’m absolutely gutted.”

Her post attracted hundreds of comments with many telling them the baby’s life was more important than her first cuddle.

Do you think her vent is relevant or selfish?