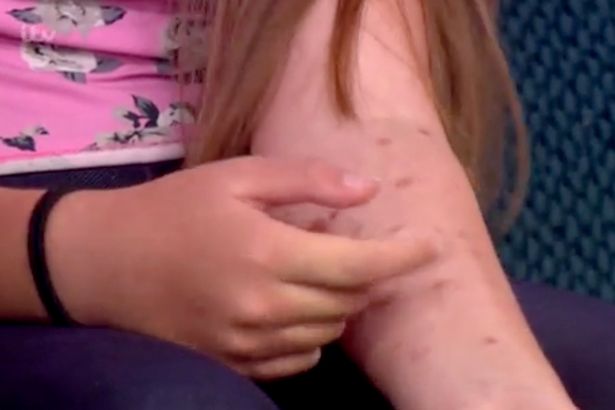 Are your kids doing the deodorant challenge? A mum has spoken out to warn other parents about the trick her daughter and friends have been doing with deodorant.

Appearing on ITV’s This Morning with her mum, 12-year-old Kaitlyn Stanley spoke about the ‘deodorant challenge’ which has left her arm severely burned.

Her mother Sara Stanley shook her head as young Kaitlyn told presenters Rylan Clark-Neil and Alison Hammond : “My friends started doing it. You spray it and then it goes white and it looks really cool so I tried it.”

Spotted burns were evident all the way up the young girl’s arm.

When Rylan asked her: “Did you realise that you’re actually really damaging your skin,” Kaitlyn replied “no”.

She “didn’t know” how she felt about her arm looking as it does now. Kaitlyn added that she had “no idea” how many times she’d done it.

Her worried mum Sara Stanley posted a warning on Facebook which said that ‘apparently the new craze is the deodorant challenge’.

She wrote: “I’ve warned Kaitlyn Stanley not to do it again… Just want you all to be aware xx.”

She said she spoke to her daughter to “get her head round” why she had done it, before posting a status on Facebook to let other parents know and be warned, making it public so everyone could see it.

Dr Ranj Singh spoke of the serious harm this could cause.

“What the deodorant does is cools your skin down really rapidly and essentially you get frostbite that breaks the skin down.

“Not only does that hurt so you get problems with pain, it breaks the skin barrier down and it can predispose you to infection. It can damage the pigment in the skin– and that can be long-term.

“If you have damage to the pigment, you have to protect it because that could increase your chances of skin cancer later.”

He said if the skin breaks down you end up with holes in the skin, and although it isn’t common, this could result in the need for skin grafting.

A spokesperson from St John Ambulance, said: “This activity is extremely dangerous. Given the aerosol deodorants being used for this and the amount of deodorant used, not only will children burn their skin but there is also a risk of Sudden Sniffing Death Syndrome.

“The syndrome is usually associated with cardiac arrest and can occur with many types of inhalants including aerosol products. In the event of cardiac arrest, you will need to begin CPR immediately and call an ambulance.

“If someone has suffered a burn of this type but is otherwise responsive, make sure they are treated immediately by cooling the affected area as quickly as possible. Run it under cool water for at least ten minutes, or until the pain feels better.

“Don’t use ice, gels or creams as they can damage tissues and increase risk of infection. Once the burn has cooled, cover it with kitchen cling film.

“If the burn is on the face, hands, feet, or larger than the size of the person’s hand, it is likely to be a more serious burn and you should seek further medical advice.”

@thismorning my 12 year old did the stupid deodorant challenge and was left with two of these scars pic.twitter.com/7jhnM5jqKu