Article Yummy Mummy star explains why she made that controversial comment 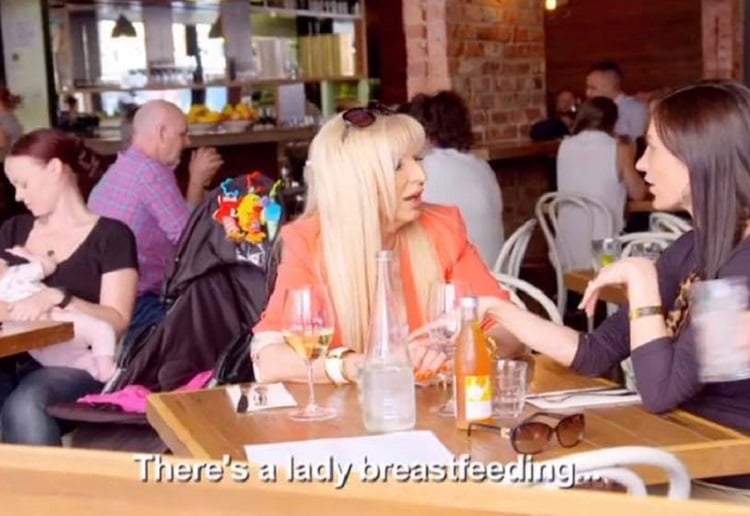 Yummy Mummy star explains why she said breastfeeding in public should be illegal.

Maria DiGeronimo explains why she made the comment that “breastfeeding in public, for me, is illegal” on Channel Seven’s new reality show, Yummy Mummies.

She explains the “sacred act of breastfeeding is physically and emotionally intimate and is not just about feeding, but equally as important is the connection and bonding of mother and child.”

“A powerful hormone that is vital for a mother to successfully breastfeed is oxytocin which stimulates the “letting down” of the breast milk. Many factors can inhibit the production of this hormone including a mother’s stress level influenced from her surrounding environment.”

She goes on to say, “Obviously, I do not suggest one has to hide or feel ashamed to breastfeed, I just personally would use the nursing areas — which nowadays are so readily available — or with no other option, I would use a light cover with intention of ensuring a more relaxed and less distracting moment for my baby to be able to engage in eating and bonding with me.

I personally feel that the time and location of a feed should warrant some rationale, as I feel the composure of a nursing mother is vital to a successful breastfeeding experience and a possible crowded place could ensue distraction.

“I feel breastfeeding is a special moment that should be witnessed by only intimate family members not just anyone walking by. I just don’t see why I should have 20, 30, 50 people walking by me with the added background noise potentially disturbing my peace with baby.”

“Furthermore, even in the most evolved societies breasts are part of one’s sexual ritual, as unfortunately society has been somewhat programmed from birth to sexualise breasts. We are bombarded with daily sexualised images of women predominantly featuring breasts; from daily televised adverts to magazine covers.”

She adds, “I feel a woman’s breast is a private part of her anatomy and although they are being used for food, I don’t feel comfortable with a flash of my nipple as I latch baby on and then off.

I am comfortable with my body, I am comfortable to wear swimsuits, and am not worried about any flaws on my body… yet I still don’t want everybody to see my bare breasts.”

What do you think about the series? Are you tuning in to watch?