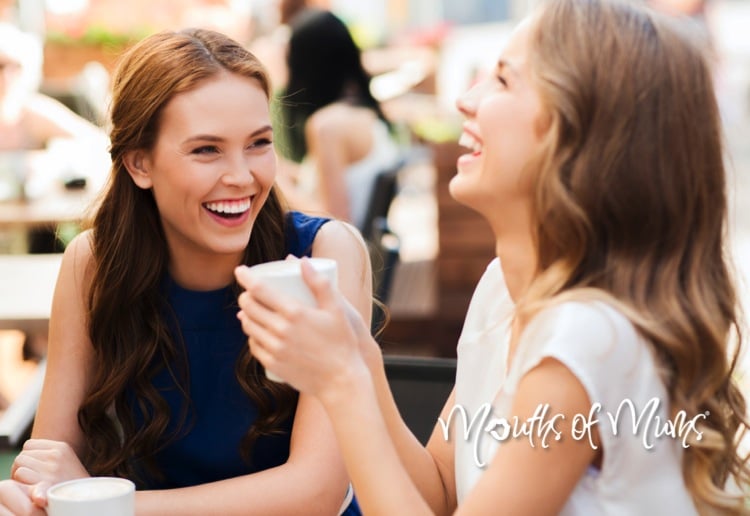 Liv from eenie meenie miney mum explains that as she has grown older [and older, and older] she realised that different friends perform varying but equally vital functions in your life.

Some friends, you might have an unspoken agreement with to pluck out each others moustache hairs should you wind up in a coma [resulting from being forced to listen to your son talk about bey-blades, for example]. Or to delete your browser history upon your unexpected death, because no one’s legacy should be how many hours they’ve spent googling “poodles wearing pants”.

Some are friends who might really, truly commit to pretending the floor is lava when you’ve declared “the floor is lava”, when other, lesser friends might act like it’s not, even though you clearly just said that it is.

And if you’re lucky, you’ve probably met someone along the way who would spend the necessary amount of time searching for the perfectly filtered picture of you on your Instagram to give to the police if you went missing; because if you’re gonna be on the news, they know you’re gonna wanna look like the best lit freakin’ Valencia version of yourself with just enough dialled up highlight and dialled down sharpness to make you look damn good but also enough like yourself that the police will still be able to recognise you when they eventually find you lost in the kids craft section of Kmart.

One of the newest brand of friends I’ve come across in the last couple of years, though, is the school-mum BFF. She’s that one mum who you’ve met at school drop off or an excursion or around the playground after pick up time that just inherently understands your need for 5pm wine and calling your kid an asshole behind their backs every now and then. We’ve all got one [a school mum bff, not an asshole kid, well actually… probably  both]. If you’re lucky, you’ve got a few. Finding a school mum BFF is like getting that long straight piece in Tetris. You’re just like “ooohhhhhhhhh yeahhhh, things about to get GOOD”.

Here’s how you can spot one.

1) You like their kids and they like yours. And I have it on good authority that kids can be pretty difficult to like. I don’t even like my own kids half the time let alone someone else’s. You know you’ve really connected with someone when their kid accidentally spits half chewed jatz biscuits in your face while telling you about the Lego Star Wars Sandspeeder he just built and you don’t even bat an eyelid let alone recoil in disgusted horror.

2) You’ve seen each others houses, even when they look like your floor has been converted into a [sticky] agility course that’s been custom designed by a three year old to kill you in your sleep. You both understand that you will one day clean your houses. And by clean, I mean drink wine and spray everything with Febreze.

3) You’ve seen each other in your natural states. No I don’t mean nude. This is not #dickheaddean from Married at First Sight‘s poly-amorous fantasy life. When I say natural, I mean ugly.

4) She can tell off your kids and you don’t feel like cutting a bitch.

5) She’ll tell you you’re not a shit mum and/or a shit human. Or that you are when you need a cold hard honesty bomb dropped on you from a great height.

6) You pick up each others slack. You’ll look after her kids when she’s running late for pick up or remind her its Harmony Day and they have to wear orange to school, and she’ll have enough snacks in her tiny handbag to feed your three hungry children who have the appetites of five thousand, when you can’t even manage to remember to bring all their water bottles.

7) She doesn’t judge you or get a “tone” when your kid acts like a jerk. She might even make excuses for them to make you feel better, even though really she knows they’re just being a jerk. Your kids are equal assholes, she gets it.

8) She’ll offer to help out when you’re suffering “mum flu” [similar phenomenon to “man flu” but no one gives a shit].

9) You actually accept her help when you have mum flu instead of insisting “no no, I’ll be right” and soldiering on through the sheer and utter misery that is not being able to breathe with your mouth closed whilst simultaneously having to run around after the tiny army of miniature humans you created yourself that never appear to be able to find their own shoes.

10) She automatically hates the kids that are mean to your kids. When you text her to say some little twat face year 2 called your daughter ugly in the school yard she texts you right back with “right, who do I have to kill?”

11) She knows what you’re thinking from across the school yard dependant on who you’re talking to, what facial expression you have and what you’re doing with your arms, without you even having to say a word.

12) You can have spontaneous catch-ups without having to spend 3 weeks scrubbing the dried weetbix off the bench top or hiding all the superfluous rubbish in the laundry ahead of her arrival. Usually you need at least a months notice before doing anything spontaneous.

13) You understand and respect the rules and boundaries you both have for your children even though they might be different. Like she won’t let your 6 year old son watch Jurassic World for example, no matter how much he reassures her he’s allowed to despite the fact that he gets scared and has to leave the room when Mr Todd gets cross in Peter Rabbit.

14) You’re honest with her about your opinion on those really uncomfortable, expensive shoes she bought that are really ugly but she loves them and she won’t act like you pissed in her breakfast because you were honest that they’re ugly. [They’re super ugly][Just sayin’].

15) She laughs at your jokes. In my world this a pre-requisite for all types of friends really, but given the amount of alcohol and good humour it takes to navigate being a parent, it’s especially helpful in a school mum BFF. Because you know, you think you’re funny… but she makes it official.

She makes having school aged kids more bearable and I plan on bugging her every day for the foreseeable future.

This post originally appeared on eenie meenie miney mum and has been shared with full permission.

Do you have a school mum BFF?

Read more: Why Schools Believe It Is Time We Ban The Term ‘Best Friends’