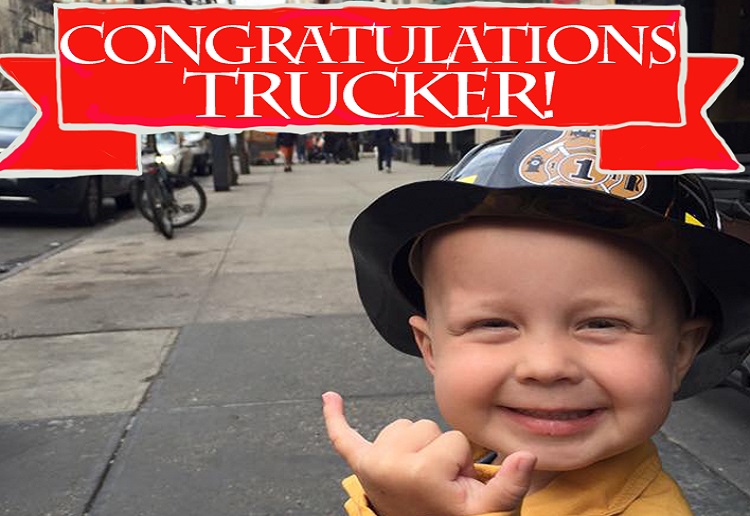 Trucker Dukes the young cancer patient who was sworn into the New York City Fire Department as an honorary firefighter in May 2016, has sadly lost the fight.

In May last year we originally shared Trucker’s story, sadly Trucker has recently passed away in his mumma’s arms after a long fight.

“Trucker’s passing has been the hardest experience you can imagine,” mum Shauna Dukes said in a statement to ABC News. “Now we get to celebrate his extraordinary life.”

“We are so sad and miss him terribly already,” she continued. “We want to share our story in the hope that people not take life for granted.”

On March 3, the announcement that Trucker had died was made on his community Facebook page.

We prayed that his passing (and I say passing because we have hope of seeing him again in Heaven) would be peaceful, not painful and with ohana there. Our God answered this prayer.

We love you little warrior. Run free in heaven with no pain, no tears, no suffering!! ”

Trucker Dukes was diagnosed with Stage IV neuroblastoma when he was just 19 months old. He was sworn into the New York City Fire Department as an honorary firefighter in May 2016.

“This honour is so special to us because Trucker really thinks he’s a fireman,” Shauna Dukes, Trucker’s mom, wrote on Facebook. “We are so blessed to have been adopted by the FDNY. Time and time again, I have watched big tough men fall in love with Trucker. It’s really something special.”

Team Trucker – Trucker Dukes Supporters wrote on Facebook –
“We want to let you know about exciting news for Trucker Dukes and his family!

Trucker Dukes will be sworn into the New York City Fire Department as an honorary firefighter in an oath ceremony led by Daniel A. Nigro, the 33rd Fire Commissioner on May 31, 2016 at the FDNY Headquarters in Brooklyn, NY.

“This honour is so special to us because Trucker-Boy really thinks he’s a fireman,” Shauna Dukes, Trucker’s mom said. “We are so blessed to have been adopted by the FDNY. Time and time again, I have watched big tough men fall in love with Trucker. It’s really something special.”

Three-year-old Trucker Dukes, from Maui, Hawaii, is a patient at Memorial Sloan Kettering Cancer Center (MSK) in New York. At 19-months-old he was diagnosed with Stage IV Neuroblastoma and transferred treatment to MSK where they specialize in Neuroblastoma. Recently, Humans of New York (HONY) began featuring stories from the Pediatric Department of MSK and has raised more than $1 million for the department in 10 days.

Joshua Dukes, Trucker’s dad, is a Maui firefighter and continues to work in Hawaii while their three older children attend school on Maui. Trucker and his mom travel between New York and Maui for treatments. They met FDNY Captain Jim Grismer (pictured hugging Trucker) after he exited Engine 22 on a call to the Ronald McDonald House where the Dukes stay while in NY.

“I see this little boy excitedly walking towards me with his eyes aglow. I opened my arms and he basically climbed up and hugged me around the neck,” said Grismer. “It was as if we’ve been friends/brothers for years.” Grismer and other firefighters began inviting them to visit firehouses. Firefighters from FDNY Engine 22, Ladder 13, Battalion 10 hosted Trucker and his mom for a birthday party at their firehouse.”

Our thoughts are with his loved ones.