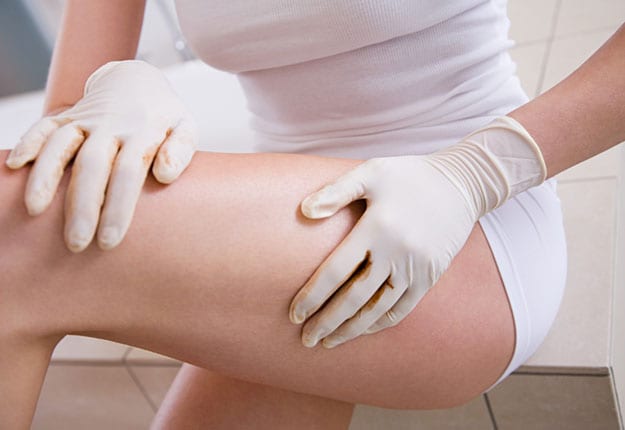 Before Twilight’s Edward Cullen in all his deathly-white cadaver-esque glory, there was me.

Let’s start at the beginning, back in 1995. Grade Ten was the first year I delved into the world of fake tanning. In those days, the stench was strong and the streaks were thick. Undeterred, I continued on my quest to look like I spent my life at the beach frolicking in a bikini, instead of indoors reading the Anne of Green Gables series. (However, Gilbert Blythe will always hold a special place in my heart.)

Fake tanning was often accompanied with squeezing lemon juice directly onto my dark brown hair in a bid to be a bronzed blonde bombshell, just like the popular girls at school who got pashed every weekend. Alas, to no avail. Given my hair was also spiral permed, the result was random lighter frizzed bits among the oh-so-natural waves and straight regrowth. Hot.

At this difficult stage, Nicole Kidman became a saving grace and her freckled ginger complexion provided some comfort that things could have been slightly worse. (Google ‘BMX Bandits’ or ‘Bush Christmas’ for a visual.)

I’m sure I went through later teenage years with tell-tale stained palms and orange ankles. For whatever strange reason, I didn’t fake tan the night I went out on a first date. The charming gent told me I had the whitest legs he had ever seen. (And that was only from knees-down, i.e. the part of my legs that actually got sun exposure!)

Anyway, beggars can’t be choosers so I married him a few years later. Mainly because he has lovely olive skin and can even get a sock tan. *Swoon*

When our daughter was born, I was thrilled when the initial pink hue of birth subsided and a tan colour emerged. Yippee, I’ve done it, I thought. I’ve outbred the pasty-skin genes with my cunning plan!

Umm, no. Turned out our little lass had a touch of jaundice. Now, at almost two, she is as white as a ghost. As her mother, I acknowledge my duty of care involves Slip! Slop! Slap! every day. But if and when she needs it, I’ll be standing by with the fake tan bottle to teach her all my tips and tricks.

Speaking of which, after almost two decades of product testing, here are my top picks when you want a solid, natural colour quickly (and none of that daily gradual tan moisturiser rubbish):

This Community Service Announcement for fellow geckos is delivered free of charge. Please, no need to thank me – just get bronzed!

(But if you think you’ve got a better tanning brand in your bathroom cabinet, let me know!)