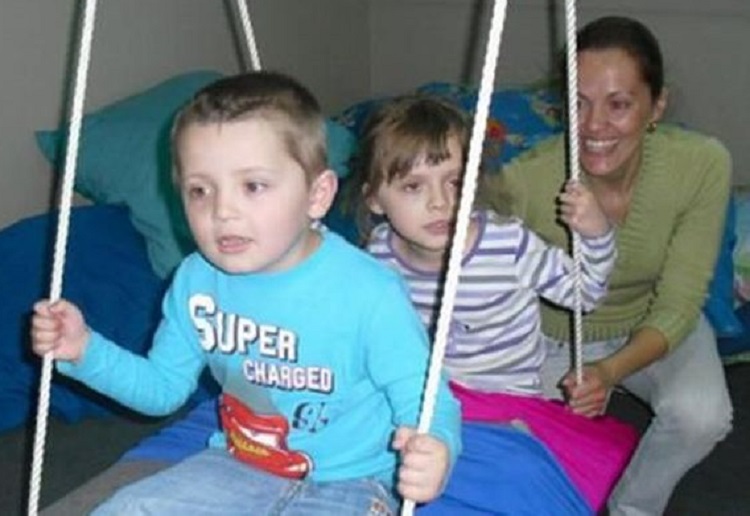 Family of four found dead at a house in Sydney’s north, believed to be gassed in a murder suicide.

As police continue to piece together why Fernando Manrique gassed his entire family, it has emerged wife Maria Lutz planned to return to Colombia struggling with the pressure of raising two severely autistic children.

Devoted mother Maria, 43, struggled to juggle the pressures of living in a country far from home, while meeting the daily medical and therapy challenges of two deaf and non-verbal children.

Adelaide now reports, Mr Manrique, 44, often spent time in Asia working, which left Maria to crack under the strain of managing her “little angels” and she had announced weeks ago she was quitting the Northern Beaches, where the couple had lived since 2005, to return to Bogota to seek help from family.

Her desperation to quit Australia drove a wedge between the pair who also fought over how best to raise their two children Elisa, 11, and Martin, 10.

A close friend, who asked not to be named, told The City Paper in Bogota: “With a marriage struggling over constant worries of the future of their severely autistic children, María Claudia wanted to return to Colombia.

“The children could not travel due to their health issues on a 14-hour flight and in order to comfort María Claudia, her family would visit Australia once-a-year.”

The friend added: “She was going home this year, she decided.”

Police investigators of the Northern Beaches have unearthed an “elaborate gas network” connected to two cylinders outside the home in Davidson that Manrique had built himself.

It is believed the web of pipes filtered the gas into the rooms wiping out the entire family.

The families of Fernando Manrique, 44, and Maria Claudia Lutz, 43, have flown into Sydney and visited the Davidson home where the couple and their two children Elisa, 11, and Martin, 10, were found dead last week.

“There is no judgement, no blame, the families are in this standing together as one,” Wahroonga Parish Father Ranson told News Corp on behalf of the Manrique and Lutz families.

“This witness of love runs counter to the ordinary expectations of blame, and for this reason, we will farewell them as a family.”

Father Ranson said the tragedy highlighted the fragility of not just families with special needs children, but all families and shines a spotlight on support offered to men.

“They have been so touched by the outpouring of love and support of friends and community at large and they want the funeral to be a celebration of that love and support,” Father Ranson said.

Maria’s brother has arrived from Colombia and is demanding to know why authorities ignored her pleas for help.

Juan Lutz Pena, a doctor from Colombia, is “deeply upset” his sister was “severely depressed” and so desperate for help she would ring the Department of Family and Community Services “nine times a day”.

Mr Lutz Pena and his parents Alicia and Ernesto flew in from Bogota over the weekend and were scheduled to meet with police yesterday for the grim task of identifying the bodies.

“Juan is deeply upset by the death of his sister and wants to know why the relationship between Family and Community Services broke down,” a source close to the family said.

“He was very close to Maria and, as a father himself, adored Elisa and Martin. He longed for them all to come back to Colombia to be close to family.”

The Daily Telegraph revealed on Saturday that the 43-year-old mother of two was receiving less than five hours of government help each week for her non-verbal autistic children, who were also deaf.

According to a family friend she was a “broken woman” and “severely depressed” in the months leading to her death.

It is understood her marriage to childhood sweetheart Manrique had broken down, with the pair barely speaking for years.

“Maria was so anxious and depressed that if (the Department of Family and Community Services) called to change an appointment or cancel (then) it threw her,” a family friend said.

“She would ring them sometimes nine times a day to confirm they had cancelled or changed things — or to ask for extra help.

“She felt completely alone and was a broken woman and depressed.”

The source said Maria was “definitely struggling with mental health”.

“The marriage had collapsed in the last years and the two of them were not speaking,” the source said.

If you are feeling unable to cope, lost or alone please contact 13 11 14

While the cause of the family’s death has still not been confirmed, neighbours close to the parents believe the children’s severe learning disabilities put excessive strain on the household, the Daily Telegraph reports.

According to neighbours, Ms Lutz would spend many sleepless nights desperately trying to care for her children’s needs while ensuring they attended therapy appointments.

“Maria used to tell me how hard it was on her and her husband having two kids who were deaf and dumb,” neighbour Sonja Perry told the newspaper.

“She said it was a heavy thing on her heart and some days she found it impossible to cope. They were such a lovely, friendly couple.”

Superintendent Dave Darcy told media outside the home that the two officers who arrived first at the scene had found what they saw “extremely confronting”.

He declined to confirm how the family had died, but said police are investigating a possible murder-suicide. It is understood detectives are considering the possibility the family was poisoned.

The Courier Mail reports it is believed the family have been deliberately gassed to death with a poison that was released from numerous gas bottles found throughout the house.

Mother Maria Claudia Lutz, 43, was found in one room with one of her children and her other child found alone in a separate room.

Fernando Manriques’, 44, body was found in another room in the house.

Previously on this story

Officers were called to an address on Sir Thomas Mitchell Drive in Davidson about 11.20am following a concern for welfare report. They discovered the bodies of four people, a man, a woman, a boy and a girl.

Police also found a dead dog at the house.

Alarms were raised when the mother didn’t show up for canteen duty on Monday morning, the Nine Network reports.

The family have lived in the area for about 10 years. Fernando Manrique, 44, his wife Maria Claudia Lutz, 43, and the couple’s children Martin, 10, and Eliza, 11.

It is understood perhaps the children had special needs. Police have since confirmed both children were disabled.

Neighbours are in disbelief. Investigations are continuing.

Police are not willing to discuss cause of death.  Two of the victims were “nationals from another country”.

“The mother is held in very high regard in this community. Since coming to Australia they have made a significant contribution to how we live. They’ve done a fantastic job” – Superintendant Dave Darcy.

Police say the 44-year-old man and 43-year-old female found inside the home on Sir Thomas Mitchell Drive were foreign nationals. The boy was aged 10-year-old. The girl, 11-years-old. Both children had disabilities.

The family is believed to be Colombian and moved to the area in 2005. They weren’t known to police.

NSW Police have still not given any further details about how they died.

The Catholic community on Sydney’s North Shore is in mourning after the tragic death of a family of four in Davidson.

The children were enrolled at St Lucy’s School in Wahroonga, a Catholic school that caters for children with intellectual disabilities.

“This is an exceptional family. They’ve been at the school here for six years. Two beautiful children. And mum was a very active within the school – almost a cornerstone of the school in many ways,” St Lucy’s acting principal Warren Hopley told reporters.

“I don’t think she slept for many hours of the night because of the difficulties often with the two children, and yet she would always be here helping out in every way she possibly could.” Mr Hopley said he wasn’t aware of any issues in the family.

“Mum was always very positive and a happy person. Always greeted the school kids in the most wonderful way”.

He said the children had very complex needs.

The mum was to work in the canteen today and they became worried when she didn’t arrive and they couldn’t make contact with her.

The Catholic community on Sydney’s North Shore is in mourning after the tragic death of a family in Davidson. #Davidson #7News pic.twitter.com/a8gBk4efKY

This story is breaking news. More details to come.