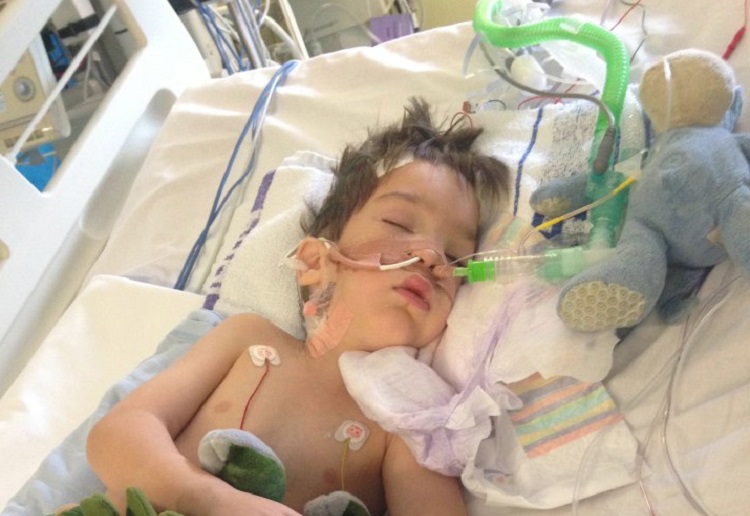 Mum speaks of her heartache after her son was left severely brain damaged after eating a ham sandwich for lunch.

Dylan Woodley, four, was happily tucking into his lunch in November last year when a piece of the sliced deli meat became lodged in his throat, reports The Sun.

Gasping for air, he ran to his mum, Ally Wheatley, for help.

Quick-thinking Ally, 27, thumped him repeatedly on his back to dislodge the ham and help her son breathe again.

Despite her frantic efforts, he went limp in her arms and suffered a cardiac arrest in her arms.

Paramedics took over from Ally within minutes but by the time they had arrived Dylan’s brain had been starved of oxygen for 45 minutes, leaving him with severe brain damage.

Nearly one year later, little Dylan remains in hospital where he receives round the clock care and intensive therapy, with mum living in nearby family accommodation.

Speaking for the first time since the tragic accident Ally, from Wells, Somerset, said: “I dread to think what I would be like if he hadn’t survived, but luckily we didn’t have to go through that.

“I still think – was there something more I could have done that day?

“The last paramedic to leave the house before I went to hospital after Dylan said I did a brilliant job and there was nothing more that I could have done.

“But as a parent you still question yourself.  Was there more I could have done?  Would it have made a different? That’s something that will always be there.

“Life can change so quickly in a second and people don’t realise that.”

“People say to me they don’t know how I do it, but you don’t know what you can do until you have to just have to.

“He can’t do much for himself but he’s still there – the cheeky Dylan we had this time last year.

“It has been hard but seeing his face and him fighting every day – that’s keep me going.”

Despite being starved of oxygen for such a long time, Dylan pulled through and woke up.

When he awoke he was diagnosed with global hypoxia – severe brain damage – as well as quadriplegic cerebral palsy.

The bubbly little fighter can still smile and has battled to learn how to communicate with his eyes, but he is bed bound, can’t speak or move his legs, and is currently fed through a tube.

“He would never sit still before and was hard work, getting into everything like a normal cheeky toddler.

“Now he can’t do much but can communicate with his eyes, picking between two objects and giving long blinks.

“He has still got his cheeky personality and will smile when he thinks nobody is looking.”

Dylan has been living in hospital since the accident.

Their family home is currently undergoing council-funded alterations so it will be ready when Dylan is well enough to return home.

Such a little fighter!