Article Are artificial sweeteners a good alternative to sugar? 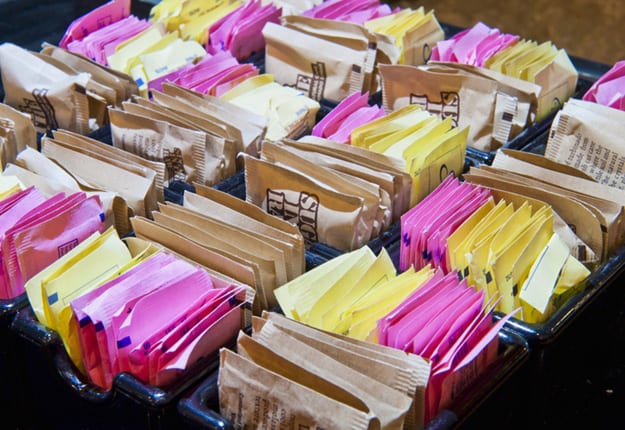 Some people recommend using artificial sweeteners as an alternative to real sugar for diabetics and for overweight individuals, as it’s calorie free and fat free – so it’s got to be good for us, right? Wrong – there’s a lot of information out there about the dangers of some types of artificial sweetener and how it could potentially cause a wide range of adverse side effects.

The most common artificial sweetener, aspartame (Code 951, also known as NutraSweet) is 200 times sweeter than sugar. It’s a proven carcinogen and when it is broken down by the body, two particular substances are released – phenylalanine, which is amino acid that could cause numerous problems if you are allergic to it, and methanol, which is actually wood alcohol.

However, the FDA says that this product is completely safe for human consumption within certain limits. When an individual eats lots of foods with it in – such as soft drinks, diet yoghurts and chewing gum, they could be inadvertently consuming too much aspartame. If you eat too much aspartame, you could experience some nasty side effects:

These side effects could be particularly damaging to our children. As adults, all of the systems throughout our body are fully formed, meaning that our brain and vernacular system have more protection from chemicals. In children, however, these systems are nowhere near fully formed and so more chemicals can slip through, potentially causing a number of problems within the body, including chemical imbalances within the brain.

Some specialists think that these chemicals could cause illnesses such as ADD, autism and ADHD – so it’s recommended that you don’t eat artificial sweeteners while pregnant or breastfeeding, and that you try not to expose your children to them following the birth.

Another artificial sweetener, sucralose (code 955, brand name Splenda) is widely available across the world and is found in thousands of ready-made food products. It’s calorie free, making it very popular with dieters, but if you eat too much of it you may well suffer from a number of adverse side effects. We only absorb about 11-27% of sucralose, with the rest being excreted by our waste system, so this is one of the less damaging artificial sweeteners.

Saccharin (code 954, brand name Sweet ‘N Low) is another artificial sweetener that is 200 times sweeter than normal sugar. Saccharin is a derivative of coal tar and 30 years ago, it was on a banned foods list as it was thought to cause cancer. A study done on rats found that when the sweetener combined with a particular protein, it damaged the lining of the bladder, leading to the growth of large cancerous tumors. However, saccharin is no longer on the dangerous foods list as scientists found that our biochemical make-up is different to that of rats.

Acesulfame Potassium, also known as Ace K (code 950) is another artificial sweetener, but it’s not very sweet. It has a bitter aftertaste so it tends to be combined with other sweeteners. It was discovered in 1967, and it is basically a combination of chemicals. Generally, it’s considered to be a carcinogen if you consume over the daily recommended limit – but as mentioned before, you might consume it without even realising. A study on mice found that ace k actually affected the prenatal development of mice within the womb, because the sweetness was ingested through the amniotic fluid. It was also present in breast milk. It’s believed that this could actually cause children to have a sweet tooth in adulthood.

If you like a little sweetness in your food, try adding some natural sweetener products – honey, agave nectar, stevia or xylitol are good natural options.