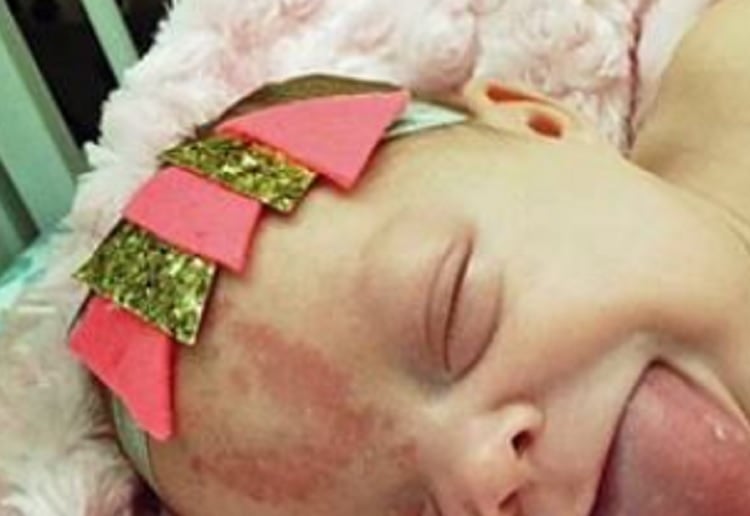 Paisley was born with such a large tongue that doctors feared it would block her airway.

Paisley Morrison-Johnson, from South Dakota, was born with Beckwith Wiedemann Syndrome (BWS) – an overgrowth disorder that affects one in every 11,000 births worldwide.

The rare condition caused her tongue to grow more than twice the size of her mouth – known as macroglossia – and it even shocked doctors, who said it was one of the largest tongues they had ever seen, reports The Sun

Approximately 90 per cent of children with BWS have an enlarged tongue, which can lead to breathing, feeding and speech problems.

Until she was six months old, Paisley had to be fed by a Gastrostomy feeding tube because she struggled to eat and wasn’t receiving the vital nutrients needed to keep her alive.

Worried parents Madison Kienow, 21, and Shannon Morrison-Johnson, 23, hoped their daughter’s mouth would grow to accommodate her overgrown tongue – but it never did.

Even after surgery to reduce its size, Paisley’s tongue continued to grow back and still hung out of her mouth.

But six months ago, Paisley had her second tongue reduction and has smiled for the first time after having a total of more than six inches of muscle removed.

Paisley, who is now 16-months-old, has even started to make the sounds that will allow her to speak her first words.

Mum-of-two Madison, a student, said: “Her tongue was constantly sticking out, she was always chewing on her tongue because it took up so much room in her mouth.

“When she was born, it was so enlarged that doctors worried it was going to affect her airways and cause her to suffocate.”

She added: “Doctors tried bottle feeding her but they couldn’t find any nipple that would help her because of her large tongue.

“Doctors told us she had one of the largest tongues they had ever seen and that the sooner she had reduction surgery the better.

“Since recovering she smiled for the very first time, I couldn’t believe it and was shocked by how beautiful my little girl looked.

“She’s like a completely new baby – her facial features look different, she smiles a lot and she has even getting close to saying her first words.

“She couldn’t even make the sounds to say words like ‘mama’ and ‘dada’ before because of the size of her tongue so this feels like a massive achievement.”

Children with the condition have a seven to 25 per cent chance of developing cancerous tumours and so Paisley will have ultrasounds and bloodwork every three months until she’s eight-years-old – when the risk significantly drops.

Madison said: “Since her second surgery, her tongue hasn’t grown back as much and it isn’t affecting her eating or drinking out of a bottle which is great.

“She is still being monitored, every three months she has scans and blood samples taken to monitor for tumours, which is one of the cons of BWS.

“Despite this, she seems like a very happy baby and is being well taken care of, so we’re really confident about her future.”