Article Being judged over goldfish 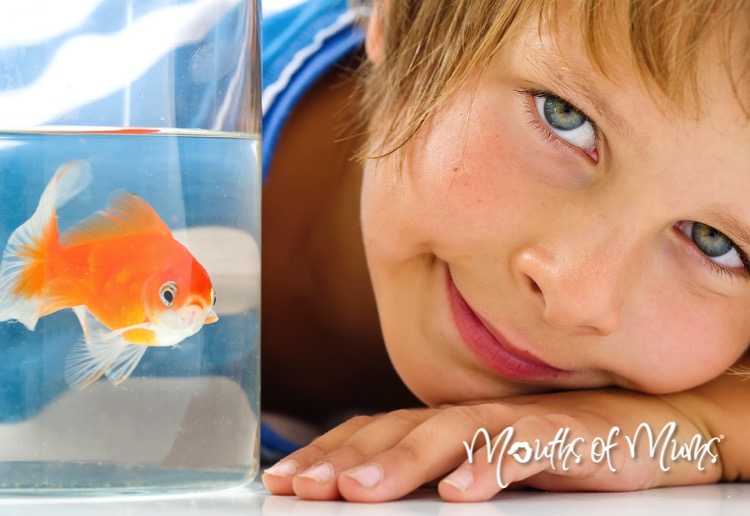 You’ve heard of parents being shamed and judged – the term “mummy shaming” is thrown around in the media every other day. Parents are shamed for what they wear to drop their kids off at school, and what they pack in their child’s lunch box. Well, it’s just been taken to a whole new level.

I was recently shamed and judged over goldfish. Yes, goldfish.

Here’s how it played out…

Negotiate with seven year old and agree to allow him to have two pet goldfish if he can listen regularly and do the jobs he is supposed to do without me sounding like a broken record. I’m already happy to have pet fish in the house and figure if I can get some behaviour modification sorted in the process, well that’s just a bonus.

He’s super excited and motivated to get his fish. Names are already picked out – inspired by Star Wars, of course.

I have a beautiful, big glass bowl that we’ve previously used as a fish bowl. The bowl survived being packed and moved house nine times, majority of those moves being interstate. But then I manage to smash the bowl accidentally just by picking it up. Talented, I know.

We decide that the day hasn’t been crazy enough, so let’s bundle everyone up and drive to the local pet store to buy a new big bowl, all the stuff we need, and get the goldfish too. Of course as we walk out the front door, the toddler has a meltdown over nothing in particular so my husband and I are temporarily deafened. We should have abandoned the plan then and there and just gone back in the house. It was a sign that things were not going to go smoothly.

But we pushed on. We were on a mission for goldfish.

Arrive at pet store to discover they only sell fancy-pants tanks, with equally fancy-pants price tags. Staff are of no assistance, they don’t know if they normally stock fish bowls.

Find another pet store online and call them to see if they have fish bowls. There is no way I’m prepared to drive 40 minutes with a toddler who may decide to yell the entire journey. No luck, but even better – husband finds an aquarium store nearby, so off we go.

The kids are beside themselves with excitement when we walk in the store. There are tanks with fish everywhere. Tropical fish, goldfish, weird looking fish. Toddler is almost hypnotised by the tropical fish, but we know the spell could be broken at any time. We had to move fast. This manoeuvre had been planned with precision.

Staff member who approaches us appears friendly. Fantastic, we’d be walking out of here in no time with everything we need. Woohoo!

I enquire if they stock fish bowls. Bad move. You’d think from the look on his face, I’d asked him if this was the place to go for black market human organs or ritualised sacrifices…

He was not impressed. I foolishly told him how I had had a fish bowl, but managed to smash it, because I’m uncoordinated and my seven year old was super excited about pet goldfish, blah blah blah. No need for a full explanation, I know, but I felt compelled.

He then proceeded to tell me that he would not sell me goldfish now that he knew I was going to put them in a bowl. He even did this snarly face and raised one eyebrow at me in disgust.

He then went on about how wrong it was to keep goldfish in bowls. The way he was going on about it, he was making out that I was some horrible, awful human being. Let’s not mention the irony of the goldfish bowl on the counter in the store right next to us. That would just be silly.

I get that he was obviously passionate about fish, but really? Was it necessary to be so rude about it?

Thankfully I engaged my brain filter to stop myself from saying what I really wanted to say. I politely thanked him for his assistance, managed to successfully extract children from store without anything being broken or tears, and drive home. Without fish, and without swearing.

High fives to me. But I so wanted to disengage the brain filter, and let rip a tirade at this fish dude.

Instead, the effing fish dude is now on my list. And I’m off to find a big arse goldfish bowl and pump and filter online. No commission for him.

Have you been judged over something as ridiculous as a fish bowl and goldfish? Please share in the comments below.