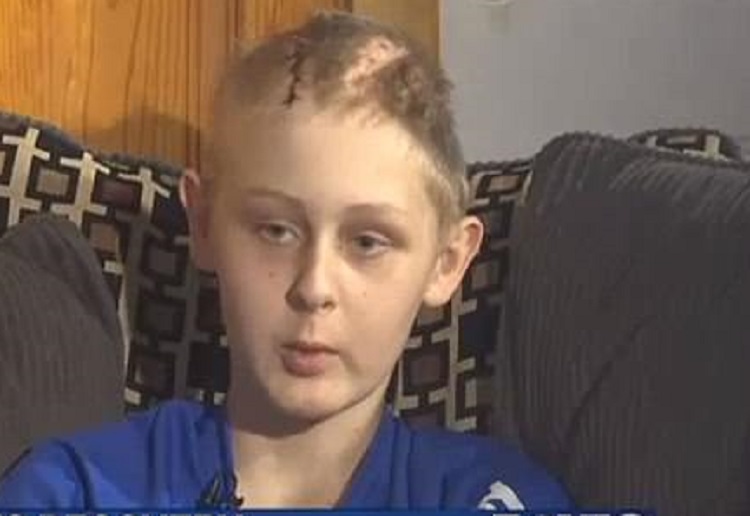 Teenage boy hailed a miracle after he woke from coma the day before his life support would be switched off after his parents heartbreaking decision to donate his organs.

Trenton McKinley, 13, told FOX10, that he was playing with his friend in March in a trailer being pulled by a dune buggy.

The teenager, from Mobile, Alabama, said his friend suddenly slammed on the breaks, causing the trailer to flip over. Trenton’s head slammed into the concrete.

He was rushed into emergency surgery at USA Medical Center where doctors told his parents that he had seven skull fractures.

‘All I saw was a stretcher with his feet hanging out. He was dead a total of 15 minutes,’ his mother, Jennifer Reindl, told FOX10.

‘When he came back, they said he would never be normal again. They told me the oxidation problems would be so bad to his brain, that he would be a vegetable if he even made it.’

His parents made the heart-breaking decision to donate his organs to children in need of transplants.

‘Five kids needed organs that matched him,’ Reindl told the station. ‘It was unfair to keep bringing him back, because it was just damaging his organs even more.’

The day before Trenton was meant to be taken off of life support, he began to show signs of brain activity.

His mother wrote in a Facebook fundraising page that he began to breathe on his own and, when he woke up, he was speaking in full sentences.

However, the road to recover has not been easy. Trenton has lost 50 pounds and suffers daily from nerve pain and seizures.

Trenton has had three brain surgeries so far and has finally been allowed to return home.

He will return to hospital soon for yet another surgery to reattach part of his skull.

We wish Trenton all the best during his recovery.