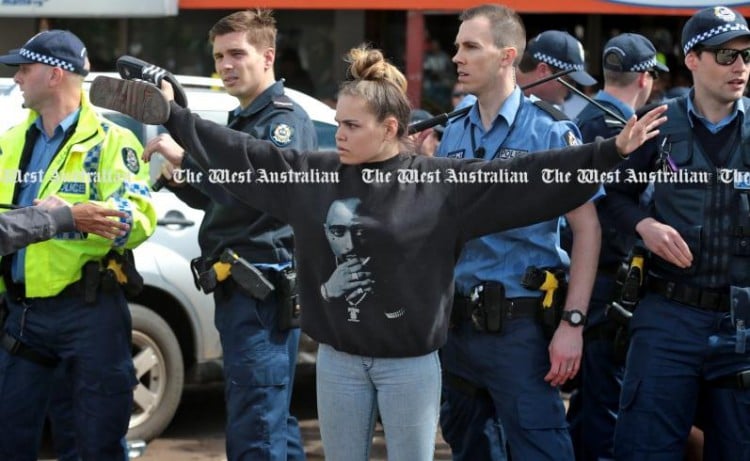 One brave girl takes a stand in the face of racial riots.

The cousin of a dead Aboriginal boy has explained why she made the ‘split second’ decision to stand up for police during the Kalgoorlie race riots, telling Daily Mail Australia: ‘We really wanted it to be a peaceful protest out of respect for (Elijah)’.

Hayley Garlett, 18, and her mother Patricia Gerardi, 39, were widely praised after they put themselves in harm’s way and stood in front of police officers during Tuesday’s riot.

Angry protesters shattered court house windows and pelted officers with rocks, furious over the death of Elijah Doughty, 14. A 55-year-old white man had been listed to appear in front of a magistrate charged with Doughty’s manslaughter.

“We did not want that to be what people think of our people. Our memories of him aren’t that, what that was yesterday,” Hayley said.

“He was a happy kid, he was always happy always smiling. He would not want that in his name, or anyone’s.

“I just wanted it to calm. I did not think, but of course I was scared. But it was something I felt I had to do.”

Speaking of the police’s role, she told the Nine Network: ‘They’re there to protect us. They’re not the ones that did that.”