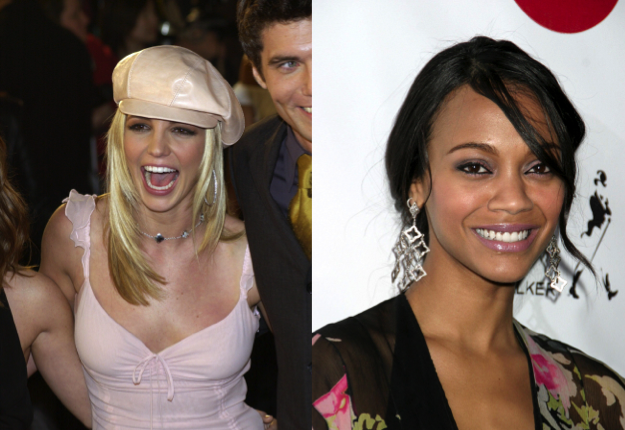 Spoiler Alert: It seems Britney Spears opened up just a little too much this week…

When heading into New York last week for the launch of her new lingerie line at New York fashion week, Britney and Zoe Saldana had an impromptu catch up.  Seems the stars spent long enough together for them to talk babies and Zoe let Britney in on a little secret she’s been keeping close to her chest since she announced that she was pregnant with her husband, Italian artist Marco Perego.

Trouble is, Britney obviously forgot the fact the news was meant to be kept on the hush! In an interviewed for Fashion week, she was asked if she would ever do another film with Zoe and her response gave away way more than Zoe would have preferred.

According to OK! Magazine, Britney came out with …

“Who knows? That’s a very good idea. But she’s pregnant with twins right now. So I’m sure she’s got a huge future ahead of her …”

Spoiler alert much?  Thanks Britney!

Yes, rumours had been swirling for months that Zoe was in for a double baby dose but having done such a great job of keeping tight-lipped about it, I would NOT be impressed to discover that one slip from a big-mouthed friend had blown the news wide open.

“You’re not ready. You don’t know what you’re in for,” said Brit, who has two young boys just a year apart.

Have you had a friend break your news to everyone?  How did you deal with it?