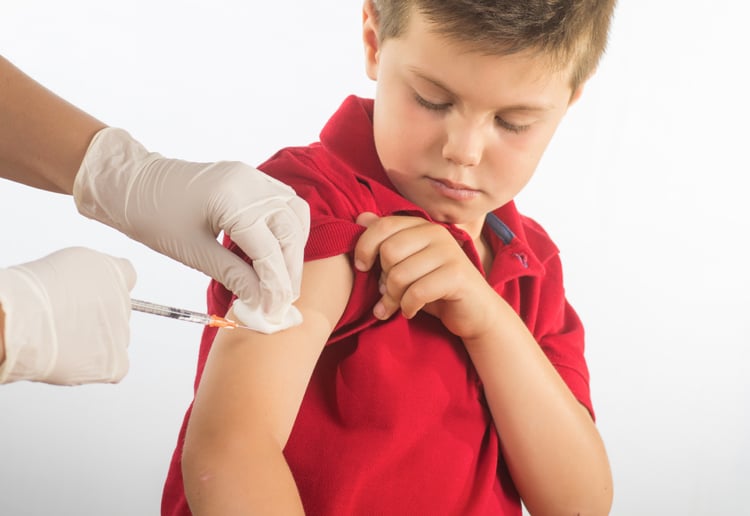 Spring may be around the corner but it’s still freezing out there. And we’re not out of the woods yet with flu. In fact flu season actually peaks in August and September.

I still haven’t got my act together to get my family vaccinated against flu so I thought that now is probably the time to act. But before I do, I had a few questions, which I think many of you would also be keen to know the answers to.

So I pulled up a chair with Victorian Deputy Chief Health Officer Dr Brett Sutton to find out the truth and myths of the flu vaccine.

Can a flu shot give you the flu?

It is impossible for the flu shot to cause ‘the flu’. The vaccines registered for use in Australia are all inactivated, which means they do not contain live virus.

The belief that the vaccine causes the flu could result from misinterpretation of either mild vaccine side effects or infection from other respiratory viruses. Both vaccine and other viruses can cause ‘flu-like’ symptoms but are usually much milder than true influenza infection.

The time for influenza infection to cause symptoms is between 24 and 72 hours so occasionally a vaccinated person may already be developing infection and falls ill just after being vaccinated.

Why is there such skepticism about getting the flu shot?

The flu shot changes every year to match different strains of the flu that are circulating. Because the flu virus can change and mutate, sometimes the match between the strains in the flu shot and the flu strain circulating don’t exactly match up. This was certainly the case in 2017 which saw large numbers of flu in the community, and unfortunately a number of deaths.

Among healthy adults, influenza vaccine provides protection, even when circulating viruses do not exactly match the vaccine viruses. The best defense is always getting an annual flu shot.

You can think of the flu shot as a seatbelt. When used properly, a seatbelt reduces the likelihood that you’d be injured in a car accident. However, they aren’t perfect and won’t prevent all injuries. Like a seatbelt, the influenza vaccine isn’t perfect because the flu strain chosen to be in the vaccine each year needs to match the one that is circulating in the community. However, the vaccine will reduce the chance of getting influenza and its potentially serious complications, including death.

Can the flu shot cause severe side effects or reactions?

All vaccines produce an immune response in the body. It is essentially your body’s way of building the protective antibodies to fight off the real virus should you get it. Some of these responses can include a mild fever and headache, amounting to flu-like symptoms. This could result in the mistaken belief that the vaccine has given someone the flu. These side effects may occur with many different types of vaccines. Severe side effects of the flu shot are extremely rare.

Is it better to get the flu than the flu vaccine?

Most Australians who get influenza are quite sick for a few days with fever, aches and pains, and sore throat, and then recover without lasting effects. However, influenza can be very serious in some people, causing hospitalisation or even death. It is not possible to predict who will be severely affected by influenza; each year, previously healthy people are hospitalised and die from the virus. Although hundreds of deaths and thousands of hospitalisations due to influenza are reported each year, many cases don’t get identified, so the true impact of influenza is much greater.

Even if a person does not get severely ill from influenza, it’s still a big inconvenience to their lives. For example, influenza can cause people to miss time from childcare, school or work because either they are too sick to attend or they have to take time off to care for a sick child. They may need to buy medications and visit the doctor or even the hospital. One study has shown that parents of children younger than 3 years of age missed an average of 3 days of work to stay home and care for their sick child. The estimated cost to the Australian healthcare system for GP visits and hospitalisations was $115 million per year for each year between April 2000 and March 2006.

Do I really need a flu vaccine every year?

Having an annual flu shot is the most important measure to prevent the flu and its complications and is recommended for all Australians over six months of age. The flu doesn’t discriminate and anyone can be affected – that’s why it is so important that everyone in the community protects themselves against the flu this season by getting their flu shot.

The flu vaccines protect you from getting infected and prevent serious disease. The flu strains constantly change so you need a new vaccine every year to make sure you stay protected.

Every year the flu vaccine changes to match the flu virus that is most likely to be around during the flu season. Getting vaccinated every year is the best way of preventing the flu and any associated illness.

In addition to protecting you from influenza, vaccination also helps to protect people around you. If you don’t catch influenza, then you cannot spread the infection. It is particularly important to protect vulnerable people who cannot receive the vaccine themselves such as young babies less than six months old and those who have low immunity.

Reader question: I had the flu shot last year and I still got the flu – does that mean it didn’t work for me?

Yes – if you had a test for confirmed influenza then the vaccine didn’t prevent you getting the flu. It may have resulted in milder illness, which is clearly a good thing. But the vaccine isn’t perfect so infections do still occur in vaccinated people, even while many, many others are protected.

Is it safe for young children and babies to have the flu shot?

Vaccination is one of the most effective ways to prevent disease worldwide. Modern vaccines provide high levels of protection against an increasing number of diseases which, in some cases, can be fatal. As a result of successful vaccination programs in Australia, many diseases such as tetanus, diphtheria, Haemophilus influenza type B and poliovirus infection are now extremely rare.

The scientific evidence supporting vaccination is overwhelming and the benefits far outweigh the very small risks. All vaccines currently available in Australia must pass stringent safety testing before being approved for use by Australia’s regulatory authority for therapeutic goods, the Therapeutic Goods Administration. Safety testing is required by law and is usually done over many years during vaccine development.

Once vaccines are in use, their safety is continually monitored by the Therapeutic Goods Administration and other organisations. All immunisation providers play an important role in reporting adverse events following immunisation which assists in safety surveillance after a vaccine is registered for use in Australia.

Does getting the flu shot weaken my immune system?

I’m healthy so I won’t die from the flu – do I still need the vaccine?

Think you’re fit and healthy and never get the flu? The flu doesn’t discriminate, anyone can get the flu. You’re best possible protection is with the flu shot. Those who don’t have chronic illness or another vulnerability may be less likely to be hospitalised, but many people who are perfectly healthy have still needed to be hospitalised, and some have even died.

Vaccination also helps to protect people around you. If you don’t catch influenza, then you cannot spread the infection. It is particularly important to protect vulnerable people who cannot receive the vaccine themselves such as young children and those who have low immunity.

Are there any other common myths about the flu vaccine?

The best defence against the flu is with the flu shot. Everyone should get an annual flu shot anytime from mid-April onwards to be protected for the peak flu season, which is generally June to September. However, it’s never too late to be vaccinated as the flu can spread all year round.

The flu shot is now available from general practitioners and community immunisation sessions. Many of our pharmacies are also able to provide the flu shot as well as advice about the virus.

The flu shot is safe and effective and doesn’t contain any live virus so it can’t give you the flu.

An annual vaccination before the onset of each flu season is recommended for all Australians over six months of age. The peak period of flu season is typically June to September for most parts of Australia. While protection from the flu vaccine is generally expected to last for the whole season, optimal protection against the flu occurs within the first 3 to 4 months following vaccination.

For the best possible protection against the flu this year, our advice is to be vaccinated anytime from mid-April onwards. This should ensure they are protected by the time the disease begins to spread more widely in the community.

However, it is never too late to vaccinate as the flu can circulate all year round. The important thing is to get your flu shot.