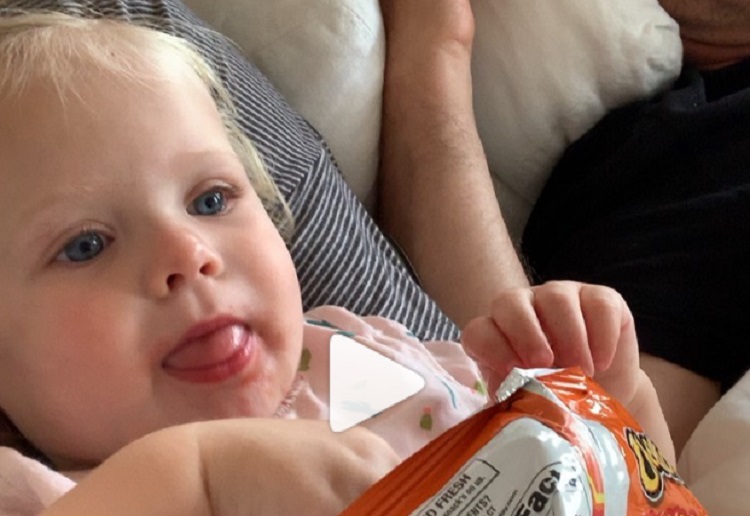 Singer Robin Thicke and his fiancee have copped a wave of criticism after sharing footage of his 16-month-old daughter eating Flamin’ Hot Cheetos.

The Blurred Lines singer’s fiancee April Love Geary shared a video of their little girl Mia munching through a bag of the super spicy snacks – which have seen people hospitalised due to their very high chilli content.

The couple are now facing heavy criticism on social media after sharing a video of their little girl Mia chowing down on the fiery snack on Monday.

‘Those Cheetos are beyond toxic, she’s just a child! Go read a parenting book,’ one Instagram user commented, prompting April to respond: ‘You’re beyond toxic for my children.’

‘Definitely my child,’ she captioned a second clip of Mia eating the spicy snack.

In addition to the criticism she received in the comments section of her post, someone also sent her a DM containing a screenshot of a 2013 article about Flamin’ Hot Cheetos ‘sending multiple children to the emergency room each year.’

Some doctors have warned that the hot flavorings can damage the stomach lining, causing it to become inflamed and painfully acidic.

‘We’re here for a good time, not a long time,’ she hit back before sharing a screenshot of the exchange on her Instagram Stories.

April shared the same sentiment when another Instagram user insisted she needed to stop feeding ‘this GMO’ to her baby girl.

The model explained that little Mia actually loves the spicy flavor, saying: ‘She’s like completely not phased by them! Lol. She likes to suck the flavor off then eat them.’

We recently shared a story of a teen who ended up in hospital after eating her fave snack of spicy CC’s. Read more on that HERE.