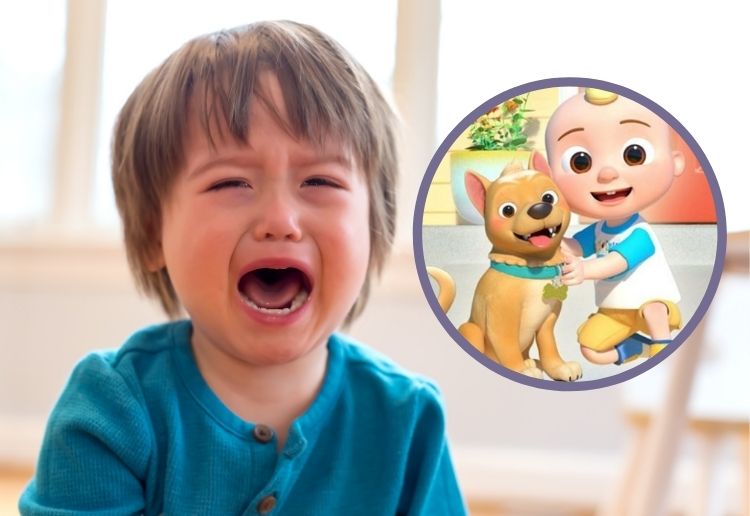 If you’ve had a child in the past few years, you’ll know all about CoComelon, and just how popular it is with the toddler set. But there are some mums who claim this innocent kids’ show is triggering tantrums and delaying speech in its target audience.

What started out streaming on YouTube has become a huge Netflix juggernaut, as well as still holding reign as the most-subscribed children’s YouTube channel in the world. There’s no denying that CoComelon’s catchy songs and nursery rhymes are the stuff of toddler dreams.

And most mums love the educational benefits as well as the peace and quiet they get while their tots are glued to the cute characters and music.

But, there’s a growing number of concerned parents who say instead of helping advance their toddler’s learning, CoComelon sent them backwards.

@sierrarenaeee♬ Pope Is a Rockstar – Sales

Mum Sierra shared her story on TikTok, claiming her two-year-old is speech delayed, and ‘addicted’ to Cocomelon. She simply switched to a different YouTube channel – the super popular Songs for Littles with Ms Rachel, and it all changed.

She claims in just two days, “He’s already saying more words and hasn’t had any tantrums.”

It prompted lots of mums to share their own thoughts, with Sara saying, “Cocomelon is so awful for children. It’s over stimulating which can delay a lot of developmental milestones.”

Fellow mum Karly Mathias also detailed her toddler’s behavioural issues after watching CoComelon. She explained that when her toddler Jasper went to his 18-month appointment a few months ago, she was extremely concerned about his speech.

“He was not showing signs that he wanted to talk, and he’s very smart. He knows what you say, but he wasn’t trying to say anything back. I expressed my concern to his paediatrician and she was not concerned at all.” Karly says after doing some research, she decided to cut out CoComelon.

She explained that as a stress-out mum who needed some downtime, she would put CoComelon on every TV in the house.

“When I cut out CoComelon and put on Ms Rachel, he started bursting out with words. He’s not even two yet so of course these aren’t clear words, but me as a mother, I knew what he was trying to say. He started saying ‘oh,oh, knock, knock, mumma, dadda. Like – hello words! And ever since we cut out CoComelon, I have seen the craziest difference. It blows my mind. He doesn’t even have as many tantrums as he used to, he’s calmed down a lot.”

‘My toddler was ‘addicted’ to CoComelon’

Other mums have shared their stories in forums, revealing just how ‘addicted’ their toddler is to the children’s show. One mum admitting her toddler watched CoComelon for at least three hours a day, and would self-harm if it wasn’t on.

“My two-year-old daughter had become addicted to CoComelon and at first I didn’t think much of it,” the mum revealed on reddit. “She would ask for Coco constantly and stayed glued to the TV. Initially I allowed this because I had a baby and having an infant attached to my body made interacting with my toddler nearly impossible. Of course everything else that comes with a new baby is also a factor. I would estimate that we watched CoComelon for at least three hours a day. The TV was NOT on all day.

“After a couple months I recognised she was becoming increasingly agitated when Coco was not on. She would throw tantrums that would sometimes involve hitting her head with her fist. At this point I reduced Coco time to only a few minutes before breakfast (so I could cook and because it’s the first thing she asks for when she wakes up).

“My baby is five-months-old now and about a month ago (after I was getting sleep and more able to interact with both of them) I decided it was time to cut off Coco. It’s been a whole month of ZERO CoComelon in this house and her head hitting tantrums have stopped, BUT SHE STILL ASKS FOR COCO ALL THE TIME!

“If that’s not a sign of addiction, I don’t know what is.”

The mum says she wishes she’d known just how additive CoComelon is, and she never would have allowed her child to watch it.

However, child experts say the show isn’t to blame for tantrums and speech delay – screen time is.

“It’s not about certain shows over others. The general trend is that there is no benefit to media,” clinical psychologist Daniel Marullo, Ph.D. told Romper.

He explained that studies into the impact of watching TV on language and social development on young toddlers found that it doesn’t help with development.

Do your toddlers watch CoComelon? Do you think it impacts their behaviour? Let us know in the comments below.