Article How does a book week costume end up in death threats?! 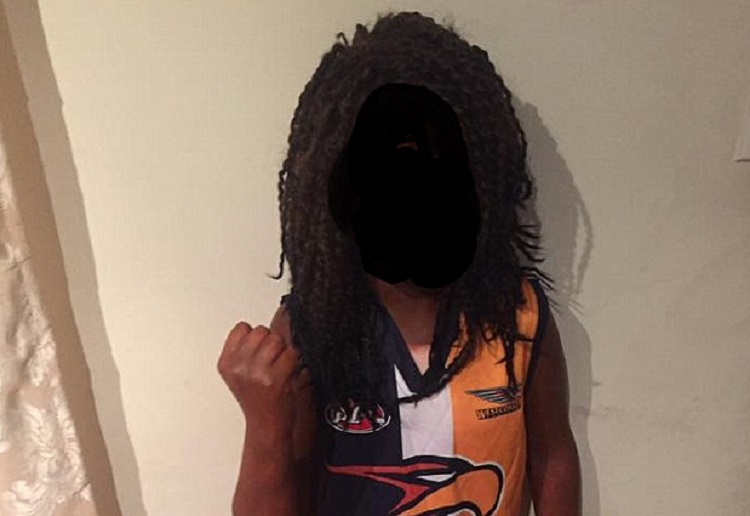 A mother has sparked outrage by dressing her son in blackface for bookweek.

The original post has since been deleted, but has been circulating on social media with criticisms the costume was racist.

‘I NEED to share my absolute QUEENING moment,’ the mother wrote. ‘My son had book week parade today. He wanted to go as his idol Nic Naitanui from the west coast Eagles.

‘I was a little worried about painting him. (So many politically correct extremists these days) he is pastey White and if I just sent him in a wig and footy gear, no one would tell who he was.

‘So I grew a set of balls and painted my boy brown and he looked fanf***ingtastic.

‘After being told by everyone on Facebook not to do it and it’s a horrible idea etc, my son won the f***ing parade!!! Parenting win! I’m celebrating by having a wine before 12pm … love love!’

The mother declined to comment when approached by Daily Mail Australia.

She has since written on her private Facebook page to say she didn’t mean to offend anyone and the story had been twisted into a ‘nasty vicious thing’.

Constance is yet to respond to questions from Daily Mail Australia, however she has taken to her Facebook page and said she didn’t agree with putting blackface on.

‘I don’t agree with dressing your child up in blackface, I can’t defend it. Because it is hurtful to our Indigenous brothers and sisters,’ Constance said.

‘I don’t believe that it is the place of white Australians to determine what is racist, unless you have felt racial discrimination it’s very difficult to determine without the assistance of a racial minority.’

‘It’s not my place to determine, but I respect the words of those who’s it is [sic].’

Constance confirmed she deleted the post, but she said she wanted ‘the Queen who shared it to know, I do not stand by any of the abuse you have received today’.

Constance has received abuse for sharing her post and is begging people to just leave her alone.

“I didn’t think I was shaming her at all, I clearly stated that I don’t believe she is racist at all, she has a beautiful son with a great hero. I just don’t think we should paint our kids in blackface if it offends and hurts people.

Now I have never received so much abuse in my life. I am being called a c#nt from her family, I have received death threats, I ban them and they start new accounts, they are relentless. I have been called every name under the sun, called a fake, told that I am too big for my boots over and over again.

I thought I had my anxiety under control but I feel like I can’t breath.

The kids have seen me cry more then ever in the last 24 hours and I don’t have my husband to remind me that it’s all going to be ok.

I am so sorry that I have offended so many people, I never meant to. I was raised to be very culturally sensitive, taken to aboriginal rights protests and spending my holidays in the communities with family that were teachers, that is part of who I am.

Please stop sending me these horrible messages and writing these things on my wall, I am feeling really broken and alone right now and I don’t have the strength for this.”

The AFL star took to Twitter today to say he did not believe the mother meant to cause harm. But he asked that she “reflect” on her actions and choose “an alternate method next time”.

“It’s a shame racism coexists in an environment where our children should be nurtured, not tortured because they are unaware of the painful historical significance ‘blackface’ has had previously on the oppressed,” he wrote.

Honestly I’ve encouraged this mistake in the past but I’m now educated of its origins.lets grow together #BookWeek pic.twitter.com/syvDibeWSS