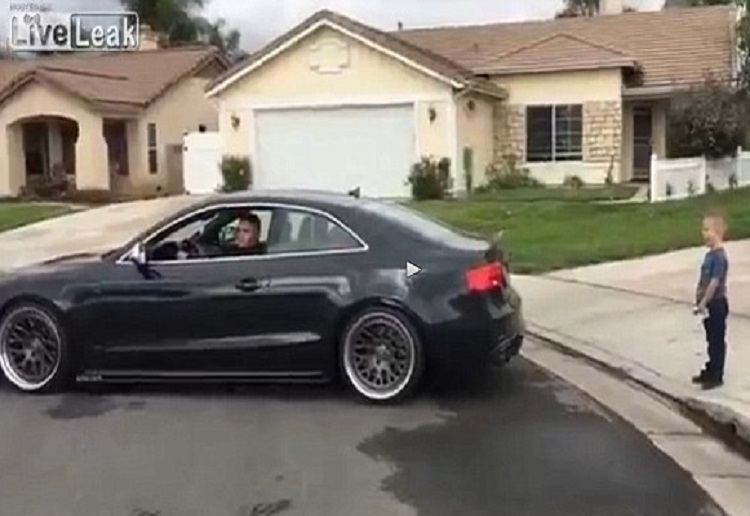 A US father decided to pull out one of his son’s front teeth by using his car.

The video has been met with mixed feelings, after it appeared on the website Live Leak this week and went viral.

While many viewers applauded the approach , others thought it cruel and unnecessary.

Daily Mail shares a video shows a boy standing on a drive at the end of a cul-de-sac. His tooth has been attached by string to the back of his father’s Audi S5.

The man rolls down the window and starts to countdown as the engine revs.

The boy’s mother is then heard telling him to ‘open your mouth’.

The father then takes off down the street, and the boy can be heard letting out a yelp. He then screams out ‘my toothy’ as he runs out onto the street looking for the tooth that has just been ripped out of his mouth by a car.

As the mother, who is filming, approaches him with the camera, the young boy opens his mouth to show that the tooth was removed, revealing both his two front teeth are missing.

Many viewers expressed outrage at what appears to be a frightening exercise to put a young child through.

I was holding my breath the whole time I must admit!

Watch for yourself below.

Earlier this year a dad used a helicopter to help pull his sons tooth.  YES, a helicopter!

He tied a loooooong piece of string onto the boys tooth and lifted the helicopter into the air while the young boy stood on the ground.  Extreme?  We think so!