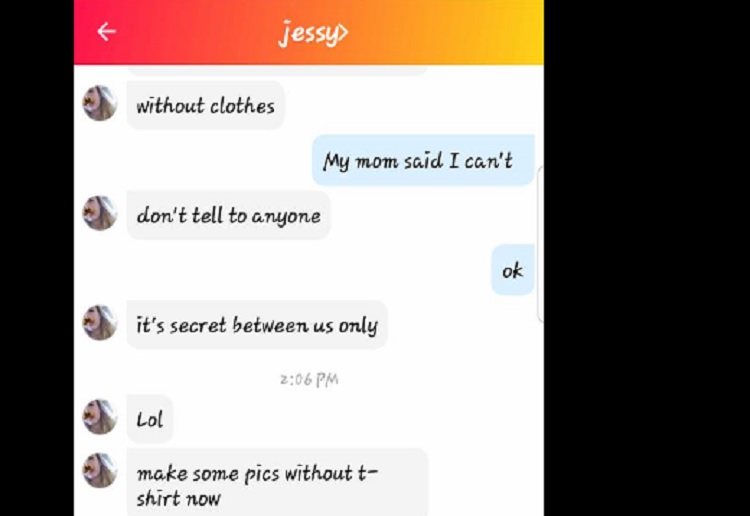 A horrified dad has released screenshots of messages his seven-year-old daughter received from a predator online, in the hope of warning other parents of the dangers of the popular app.

US father Brad Summer took to Facebook to post images of the scary text exchange between his daughter and a person posing as a nine-year-old on an app called musical.ly.

“First I want to say how proud of our daughter I am and want this to be a warning to your families,” Brad wrote.

He then shared a stream of screenshots from texts his daughter had received on the app, asking her what her age was, before telling her to send “pics without t-shirt”.

While the girl sent a cute photo showing her smiling at the camera, the person on the other end kept asking her to take a picture of her “body without t-shirt”.

The little girl then told the person, who was posing as a nine-year-old, that she couldn’t because her mum told her not to, reported Yahoo.

Instead of leaving it there, the person then got forceful, texting: “Make some pics without t-shirt now” and “It’s secret between us only”.

Brad intercepted saying, “I am her father and I am a police officer. We have documented you IP address and location. I recommend that you refrain from any other contact”.

Brad then explained on Facebook that his daughter doesn’t have her own phone and was using the app on one of her parent’s devices.

“I know many will blame us parents for this happening. But we never thought like predators and I guess we were naive in thinking that our daughter was safe on what we thought to be a kid friendly app,” he said.

“We have learned the hard way. I ask that you not judge us (many still will) but let our experience teach us all.”

Brad said his daughter mainly used the app to record music videos with her cousins and “make goofy duets of songs together”.

“We have accepted friends of theirs and our daughter believed this was another one,” he said.

“I never thought of someone pretending to be 9 to gain access to my child. We live and learn and I continue to do so everyday as a parent.”

Brad said the police have seized the person’s IP address and the investigation is ongoing.

Earlier this year we shared that a QLD mum mother was left horrified after a paedophile exposed himself to her ten-year-old daughter as she chatted to her friends on the popular app Musical.ly.

Please always be aware of what your child is doing online. Regularly check apps and talk to them about what they are doing.