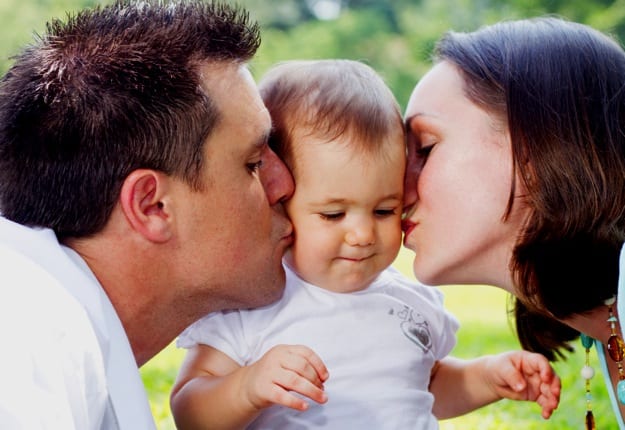 Tick-tock – for healthy mums and kids, dad’s age counts. It’s not just women who need to consider their age when planning a family.

Women are regularly reminded of their ticking biological clock. It turns out men should also pay attention to age when it comes to having a family.

A new study published today in the British Medical Journal provides persuasive evidence that children – and pregnant mums – are more likely to have health problems when dads are older.

Men’s fertility declines with age, but not as sharply as women’s. Men can continue to father children into later life – as Mick Jagger and other celebrity fathers demonstrate.

But it takes longer to get pregnant. One study in European men showed a 50% lower chance of conceiving after a year of trying at age 35, compared with men younger than 25.

Plus, women with partners age 35 and older may be more likely to experience miscarriage than those with younger partners.

Read more:
Most men don’t realise age is a factor in their fertility too

The latest study shows that the chances of pregnancy and birth problems are also increased when dads are older.

Researchers at Stanford University in California analysed data on all 40 million live births in the United States between 2007 and 2016 to look at how paternal age affects outcomes for the infant and the mother.

As the father’s age increased, so did the chances of the infant being born prematurely, having a low birth weight, or requiring medical intervention after delivery, such as assisted ventilation, admission to neonatal intensive care, or antibiotics.

If the father was 55 years or older, newborns also tended to score less well on the Apgar test used to assess the health of a child at birth.

These effects were present after adjusting for the mother’s age, smoking, race, education, and number of prenatal visits.

These latest findings add to earlier studies showing older age in fathers is linked with a variety of health conditions affecting the offspring.

Scientists in Denmark have calculated the chances of congenital problems linked to older fatherhood and show that several conditions become more prevalent. These include rare developmental conditions such as achondroplasia (dwarfism) and cleft palate.

Read more:
Why men need to think about their fertility too


Arguably the most concerning impact is on neurodevelopment and mental health. Offspring of older fathers have an increased risk of schizophrenia, mental retardation, and autism spectrum disorders.

The risk of schizophrenia increases by 47% when fathers are over 45 years old.

The rate of childhood autism increases by 80% when dads conceive after age 45.

Sign up to Thrive, a weekly dose of evidence to help you live well.

So what’s going on?

Changes in the sperm of older men are likely to contribute. The number of defective sperm containing DNA mutations increase steadily every year as men age. These arise as exposure to radiation, environmental toxins, alcohol and smoking take their toll.

Ageing itself results in less testosterone and a decline in the number and function of testicular cells.

However, genetics isn’t the full explanation. In particular, increased risk of psychiatric illness doesn’t seem to be due to spontaneous mutations in sperm DNA. While mutations contribute, they account for only about 10% to 20% of the effect.

Another possibility is that genetic risk factors naturally more prevalent in men destined to be older fathers might be passed on to their offspring, rather than new mutations.

The latest data showed negative effects of delayed fatherhood not just for the infants, but also the pregnant mothers.

The researchers estimate that around 13% of premature births and 18% of gestational diabetes in pregnancies associated with older fathers were attributable to the advanced age of the father.

Read more:
What’s the point of sex? It’s communication at a biological level


This is hard to reconcile with a genetic explanation. Other biological effects of seminal fluid on pregnancy health may be to blame.

The female immune system responds to seminal fluid by generating immune tolerance, which protects against inflammatory exposures that can harm the fetus. Human seminal fluid contains signals known to stimulate the female immune response, but it’s not yet proven whether these factors decline as men age.

What does this all mean for men contemplating fatherhood?

Most older dads don’t have fertility problems and can father babies without serious physical or developmental problems.

Overall, the father’s age is substantially less important than the mother’s age, and generally the pregnancy disorders and infant health problems are rare. So the current research evidence doesn’t justify dissuading older men from becoming fathers.

But the medical community must do a better job of communicating to couples an understanding of the risks of advanced paternal age.

Most importantly, we must include men in conversations about pregnancy planning and preconception care, to ensure all couples have the best chance of raising a healthy child.