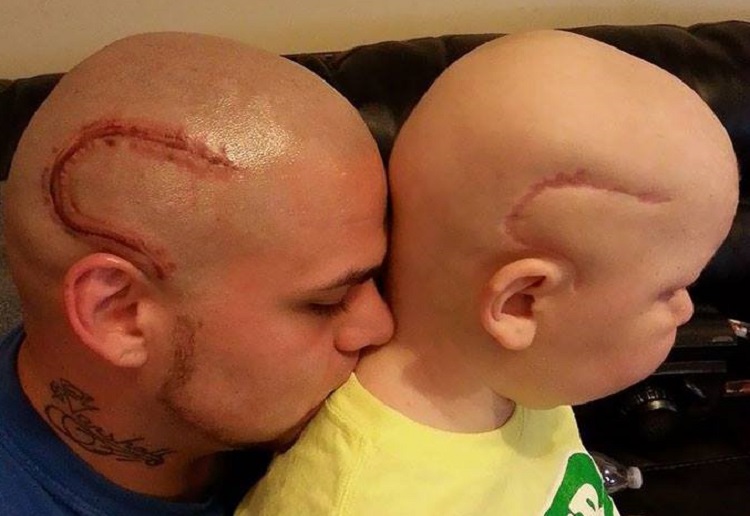 Dad goes to extraordinary lengths to show his love and support for his sick young boy by getting a tattoo on his head matching his sons brain surgery scar.

Gabriel Marshall of Kansas, eight, was diagnosed last year with an anaplastic astrocytoma, a type of malignant brain tumour, the treatment for which was surgery, reports The Daily Mail.

Gabriel’s father Josh, 28, became concerned about how the scar left behind on his son’s head from the surgery was affecting his self-confidence.

In fact, the little boy told his dad that he felt like a ‘monster’ with the scar. A fact that simply broke his father’s heart.

So, to help his son feel normal, Josh came up with the idea of getting a tattoo on his head to look identical to his son’s cancer scar.

‘I told him if people wanted to stare, they could stare at both of us,’ the doting dad told BuzzFeed.

The photo of him and Gabriel showing off their shaved heads side-by-side went up on Facebook as an entry in the competition with Josh’s explanation: ‘Me and my son at this year’s St. Baldrick’s event in Wichita, Kansas. Got my son’s scar tattooed to help his self confidence.’

Unsurprisingly, Josh won the competition, and subsequently the photo of him and Gabriel has gone viral over the web.

What an awesome dad!