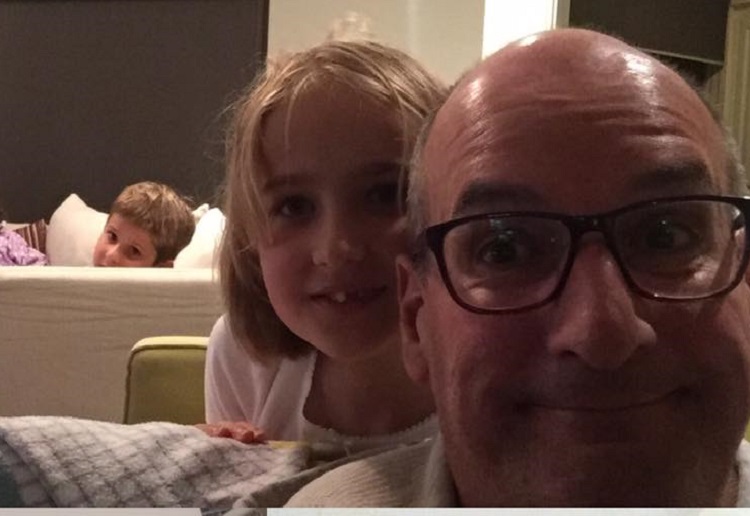 David Koch one of Australia’s most respected television and business personalities reveals a recent scary time for his family and reminds people to treasure their little ones.

David Koch shares how his family recently had a scary experience with their new premmie grandson.

Remember my happy snap on Saturday night babysitting 3 of the grandkids? About an hour later our night went to crap.
A knock at the door and 3 year old Jax arrived to join us because his 2 week old brother Teddy (who was born 3 weeks premature) was admitted to emergency with pneumonia and a bronchial virus.
Daughter Brie had rung shortly before concerned with Teddy’s breathing and we said to just take him to the hospital if nothing else than for her own peace of mind.
When she arrived all hell broke loose as the emergency medical team at Royal North Shore hooked him up to all sorts of tubes and put him in an isolation room.  They predicted he would get worse and be in hospital for 7-10 days.
Today Teddy was discharged… Baffling the staff on how well he recovered… I reckon premmy babies must be born fighters.

Why am I telling you this?

Every year I visit the children’s hospitals of PMH and Royal Melbourne as part of Perth Telethon and Good Friday Appeal.
I’m always amazed at how positive the kids are but my heart breaks when I look into their parent’s eyes and see the love, the worry, the care.
But when you see it in the eyes of your own daughter and son-in-law, it is absolutely devastating.
And we’re the lucky ones. The emotional stress of having a child in hospital for months or years must be extraordinary. And my admiration for those parents is now so so much greater.
As it is for the medical staff at Royal North Shore. They were just amazing. Their care of not only Teddy but also Brie and CJ was unbelievable.
And then there is the Humpty Dumpty Foundation. Nearly all the equipment used by Teddy was donated by Humpty.
I’ve had a lot to do with helping Humpty in the past. I know them well, but recently my support has waned… Just because other things in life got in the way. What a wake up call I’ve had.
So why have I written this post;
. to remind us to treasure our little treasures.
. To express my heart felt thanks to all the nurses and hospital staff.
. To send my love to all parents with kids in hospital… And, naturally the
kids themselves.
. and to say to the Humpty Dumpty Foundation what a great job you do… and promise ongoing support.
#royalnorthshorehospital #humptydumptyfoundation