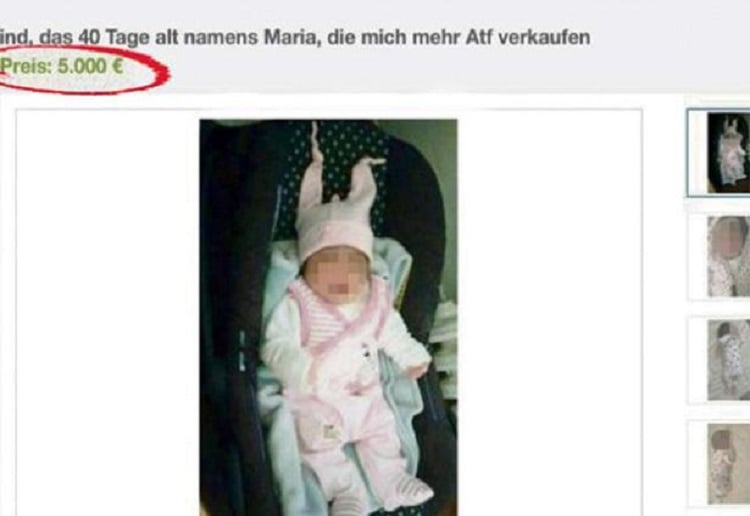 Police are investigating reports a one-month-old baby girl was put up for sale on eBay – for 5,000 Euros (over $7000 Australian dollars), reports the Mirror.

According to the advert, the child – called Maria – lives in the city of Duisburg in west Germany’s state of North Rhine-Westphalia.

The seller included pictures of the dark-haired infant wearing a variety of sleep suits in the listing titled: “Child, 40 days old named Maria… for sale.” 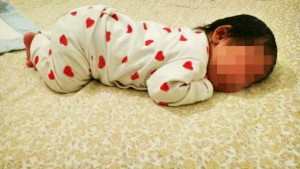 The listing was taken down by eBay within 30 minutes after it went viral on social media and internet forums.

Online users were quick to condemn the posting and report it to eBay.

Spokesman Pierre Du Bois said the company removed the listing and informed the police as soon as they became aware of the matter.

He said: “We received a lot of complaints from users and we immediately pursued the matter.

“In such a case, we provide the authorities with all available information.”

It is not yet clear whether the eBay seller really wanted to make money out of the baby – or whether it was all just a bad joke.

Parents are being questioned by police after putting their newborn baby girl up for sale on eBay.

Her father, who recently moved to Germany as a refugee, handed himself in to police and the baby was taken into care while a decision is made on whether or not the family will face criminal charges, reports Daily Mail.

It has been discovered that the child belongs to a refugee family after the father turned himself into police, who took the smartphone he used to make the ad as part of their investigation.

Prosecutors are now investigating whether or not the man will face charges after he tried to claim that he had not meant the ad seriously.

But officers are not convinced, and a spokesman added that once the investigation was complete, a decision will be taken on whether to charge him

The child is currently housed in a nursing family, where she will remain until the whole situation is clarified.