Article Pictures of baby girl gagged and tied were a joke 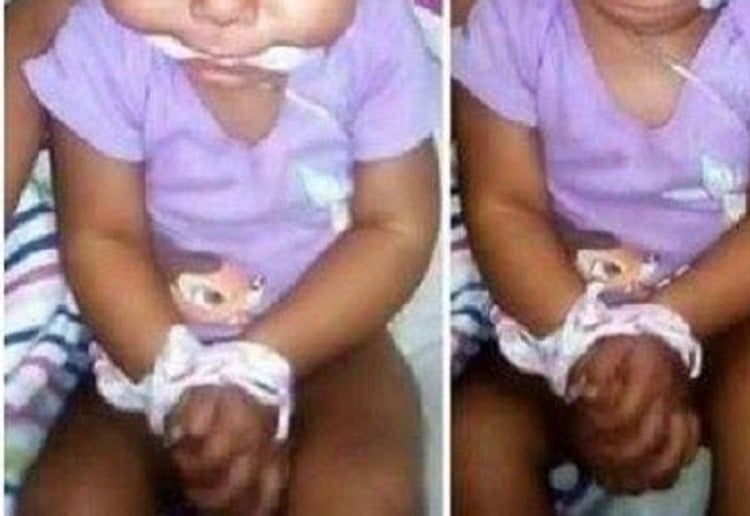 Disturbing pictures have emerged online of a nine-month-old baby girl crying in distress after being gagged and tied up by her babysitter as a “joke”.

The baby, from Mexico, was taken into care after her mother and the girl’s babysitter claimed the images were ‘just a game between friends’, reports Daily Mail.

The shocking images of the young girl came to the attention of authorities after they were widely shared on Facebook.

Alexa Contreras Mendez, aka Angie, published the image and made a formal complaint, demanding that authorities act.

Prosecutors tracked down the person who took the pictures and found she was a friend of the baby’s mother who was taking care of the child while the she was working.

Yezka Garza, head of the Prosecution for Children and Family, said that they knew about the case thanks to the Facebook posting that linked them to the original pictures.

She said: ‘We started an investigation to find the place where the girl lives and we rescued her in order to ensure her integrity and restore her right to live without violence.’

Both women, the mother and the babysitter, were interviewed by Mexican authorities and said that it was just a game between friends.

But the authorities said it was a case of neglect and they decided to take the girl into their care.

Earlier this year we shared the story of a Mother who duct taped two toddler’s mouths shut and then posted the image to Facebook with the caption “for sale” defends her actions  – “at least anyone wasn’t harmed but at the end of the day I have learned my lesson.”

And another story of A SHOCKING picture of a three-year-old boy “staged” snorting cocaine that outraged social media users, sparking calls for the child to be taken into care.

A Taiwanese dad was accused of child abuse after a picture of his son, sitting in a fridge, was shared on social media. The photo was posted as a “joke” by the father’s friend.

Again we need to remember that we have to be so careful about what we share across social media. These so called “jokes” really aren’t funny to anyone else but you.