BROUGHT TO YOU BY THE MOM CELEBRITY TEAM 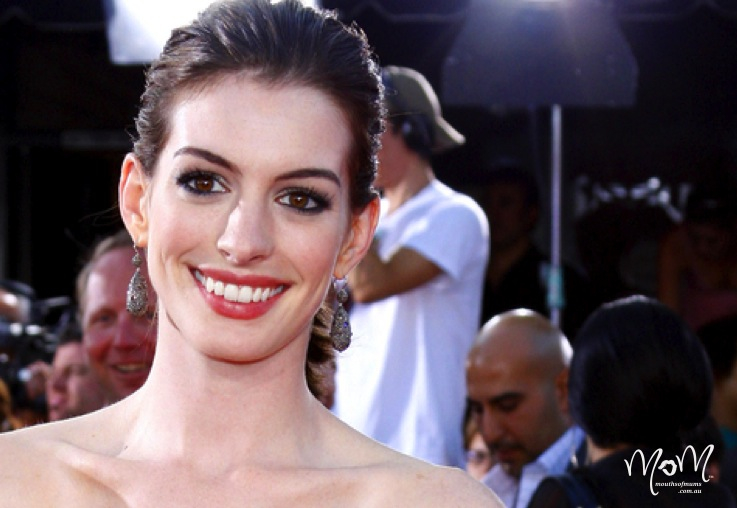 We’ve always loved Anne Hathaway; everyone does. And it seems she has some exciting news we’re going to love too!

Congratulations to Anne Hathaway and her husband Adam Shulman! Sources have revealed that they are expecting their first baby and she is thought to be between four and five months pregnant.

Speculation was more than high when at the London premiere of The Intern, Anne appeared on the red carpet in a beautiful black lace dress but didn’t look as slender through the middle as she usually does.

A beautiful little baby bump there for all to see!

Scroll through the video below to approx 3:40 to check out the baby bump action …

Now we know the news, it of course seems obvious that in the past couple of months Anne has been a little more casual than usual. We all know that time when you’re pregnant but not telling anyone, starting the show but not wanting to show … and the only way to attempt to minimise speculation is to go a little looser, a little more casual.

While Anne is yet to officially confirm her pregnancy, for the past few years, she has talked openly of wanting to start a family.

Just last year while promoting Rio 2 she said: ‘I’ve wanted to be a mother since I was 16, but I also just knew I wanted to have a career as well.

So now I think that I’m getting to an age when I don’t know exactly when that moment will be but I think I’m coming upon it.’

And back in 2012 when she was a newlywed, Anne told the Hollywood Reporter: “I’m the only one that’s not a mother [of the panel of women she had joined for a discussion]. I hope to join the ranks soon.’

The same year she told Britain’s Telegraph newspaper that she wanted ‘a family of a certain size.’

‘I’d like to have as many as I can afford, not just financially but in terms of time, because you want to make sure each one feels special.

A huge congratulations to Anne and hubby Adam!