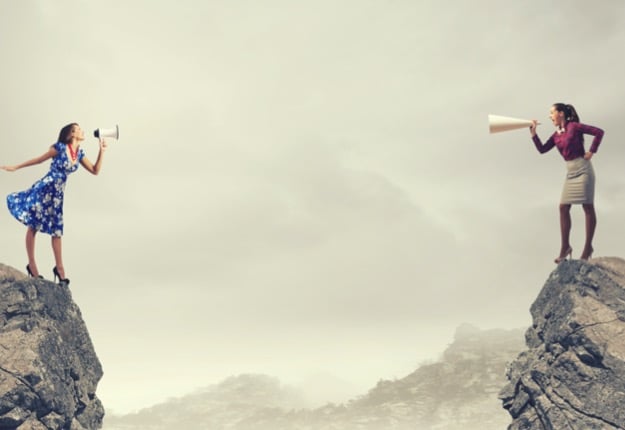 What better place to vent than a private Facebook group where you can say what you really think and feel safe. Right? Hmmm not in this case.

A private Facebook group, Mummy Wars – Aussie Style, is sparking quite a bit of outrage among parents at the moment.

The page has over 8,000 members, but many of them have recently shared concerns about the purpose of the group. Claiming it is full of nothing but bullying and judging of others.

Althought the group description does clearly warn the intentions of the group. 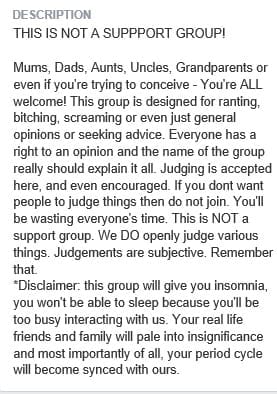 THIS IS NOT A SUPPPORT GROUP!

“Mums, Dads, Aunts, Uncles, Grandparents or even if you’re trying to conceive – You’re ALL welcome! This group is designed for ranting, bitching, screaming or even just general opinions or seeking advice. Everyone has a right to an opinion and the name of the group really should explain it all. Judging is accepted here, and even encouraged. If you dont want people to judge things then do not join. You’ll be wasting everyone’s time. This is NOT a support group. We DO openly judge various things. Judgements are subjective. Remember that.

*Disclaimer: this group will give you insomnia, you won’t be able to sleep because you’ll be too busy interacting with us. Your real life friends and family will pale into insignificance and most importantly of all, your period cycle will become synced with ours.”

Some posts to the page include images of domestic violence, insults about appearances and harsh judgements about parenting styles just to name a few.

To be fair, that is precisely what the group has been set up for!

Recent comments have included…’This page is disgusting! You people aren’t mothers!’ One woman wrote on the page, before receiving a flood of defensive comments in return.

‘Why does everyone actually enjoy putting down other mothers? Like seriously, what do you get out of it?’ Another added.

‘We don’t put down just mothers we don’t discriminate if you act like an idiot we shall treat you like one,’ a member replied.

Some members of the group have jumped to its defence saying ‘If you want to live in a unrealistic world of rainbows and butterflies, it’s probably a good idea not to join the page. If you want a page that won’t piss in your pockets and will tell it how it is, join!’

The group owner spoke out on Sunday.

‘We all judge. It’s just the way the world works. There are millions of positive parenting support groups on Facebook. Millions. They’re all the same and they all share the same rules whereby you must not judge or criticize,’ she wrote.

‘Many of us don’t want to be lovey dovey all the time. They want to discuss stupid posts and idiotic parenting choices with like minded people. They want honesty without being labeled a bully [sic].’

Are the calls for the groups closure warranted? Or is it time for some members to just hit “leave group”? Share your thoughts with us below.