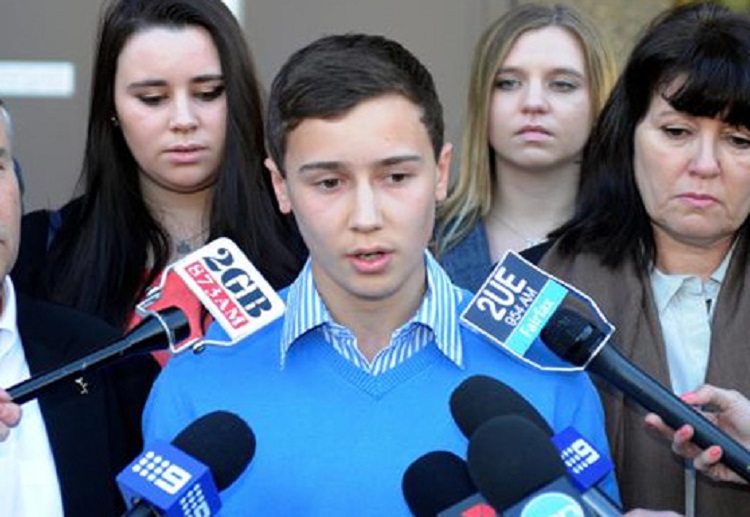 A cousin of Thomas Kelly’s killer has taken to Facebook to defend him after the death of Thomas’s younger brother, Stuart.

Karissa-Leigh Loveridge’s cousin Kieran is currently serving a 13-year prison sentence after a one punch attack on Thomas.

She blames Stuart’s parents for allowing him to be exposed to the relentless bullying that is believed to have contributed to him taking his own life.

“There is no way in this world my cousin Kieran can take the blame for Stuart’s death as he did not intentionally kill him,” she wrote on Facebook before discussing the Kelly parents.

She said Stuart, 18, was “bullied for going to politicians” over the lock-out laws, “not that this is an excuse for Stuart’s death as no one deserves to die”.

“But the public need to understand the Kelly parents did put a 16-year-old in front of the media and have continued to do so as the years have gone on,” she continued.

Karissa-Leigh said in her post while she was sorry for the loss of Stuart Kelly and “completely understand the pain the family is going through”, she was fed up with “the opinions and judgments” Kieran was receiving.

“I am not justifying my cousin’s actions but don’t just assume this is my cousin’s fault,” she wrote. 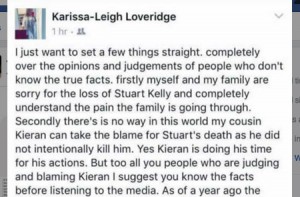 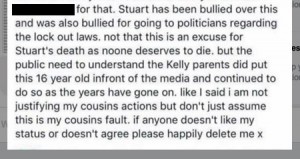