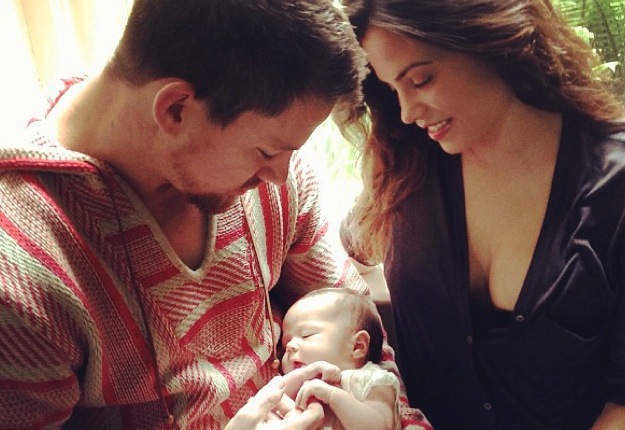 Firstly, that he drinks too much, and that doesn’t sit well with having a little one.

“I’m probably a pretty high-functioning, I guess, you know, I would say, alcoholic, I guess,” he tells GQ magazine, adding that he’s had to slow right down since daughter Everly arrived nearly a year ago, on May 31, 2013.

The other big lesson is that he would have been a handful for his mum. ”I would make a mess out of anything and climb anything. I feel really bad, now that I have a child and I know how hard it is,” he said.

He and his actress wife Jenna Dewan-Tatum “had sort of a crazy, harebrained idea to try to have a kid, and it happened the first time, basically. And I don’t think we thought it all the way through.”

Nevertheless, when it happened, “We were happy as hell about it.”

Watching his wife give birth, “I probably went to the bathroom four times and had a crying fit,” he said last year.

Like, I’m just like, I don’t know what to do! Men are useless but like, we are really useless during this. The baby’s gonna come out whether you’re there or not.

Another thing you might not know – the former stripper has an “inner fat kid” just busting to get out. His dad was seriously overweight at one stage, and the 34-year-old “can completely lose myself into just absolutely satisfying things – a really amazing cheeseburger, a pizza, good fries, a beer,” he said.

”I enjoy being comfortable and eating whatever the hell I like. It’s a big thing for me, just having the freedom to be able to do that.”

With several movies on his plate including the latest, Foxcatcher, which is already earning Oscar buzz at Cannes, he’ll be banning the booze for four months while he films the Magic Mike sequel (working title: Magic Mike XXL). ”Then, at the end of that movie, it’s go time.”

Is there anything not to like about this guy?