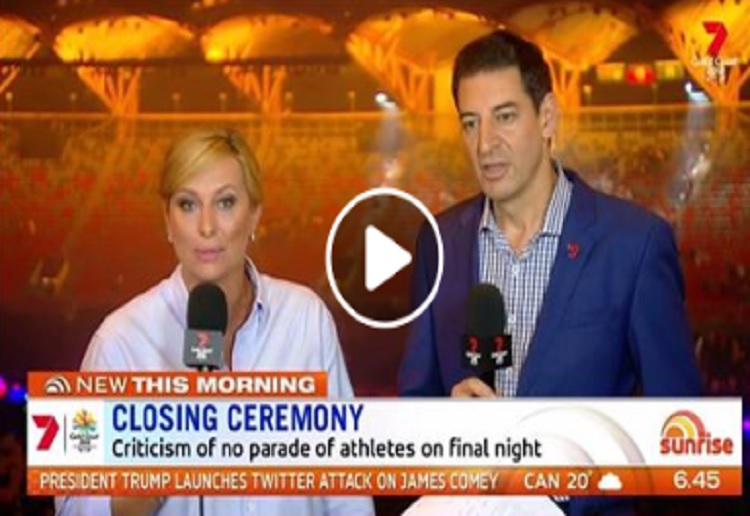 The Commonwealth Games closing ceremony was a disgrace to Australia!

The athletes entered Carrara  Stadium before the television broadcast and were barely shown to TV audiences as they stood in darkness on the fringe of the stage.

There were reports many began leaving the venue less than an hour into the event.

Channel Seven’s own commentators, Johanna Griggs and Basil Zempilas, launched into an extraordinary attack on the ceremony immediately after it finished, saying they were “furious”.

“The speeches were too many and too long. I was part of that and I acknowledge it. Again, we got that wrong,” he wrote.

This decision to bring the athletes into the stadium before the broadcast was operationally driven given there were restrictions on being able to keep the athletes waiting in comfort. We were driven by the welfare of athletes #gc2018

“We wanted athletes to be part of and enjoy the closing ceremony. However, having them come in to the stadium in the pre-show meant the TV audience were not able to see the athletes enter the stadium, alongside flag-bearers. We got that wrong.”

Mr Beattie later told the ABC the athletes were brought into the stadium early to avoid a scenario where they would have been kept “standing around”.

“We were concerned about athletes’ welfare… but we made a mistake” — @SmartState1 responds to criticism of the #GC2018 #ClosingCeremony. pic.twitter.com/sDz0vUQ5Oe

“At previous ceremonies athletes were herded around, they stand around, they hate it, they get bored, often they don’t go,” he said.

“Our decision to bring them in early was right, but what we should have done though is have them parade as well.

“The athletes would not have enjoyed last night. I understand that and frankly the buck stops with me on that.”

Did it let our Aussies down?