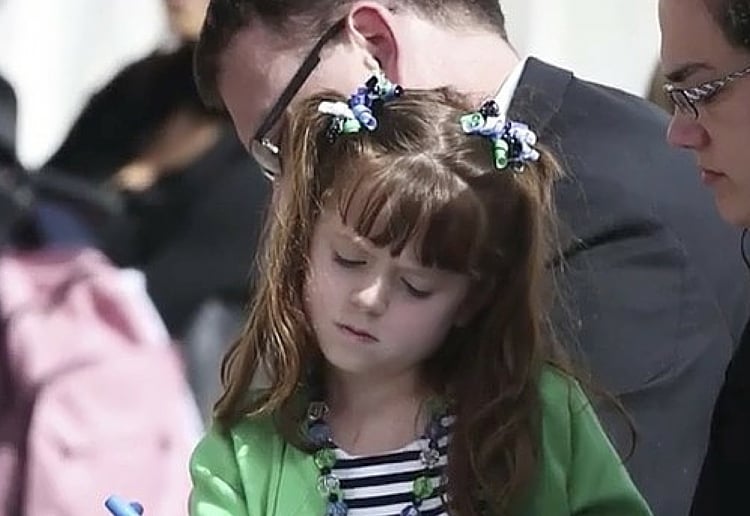 A five-year-old American girl who does not know she is gradually going blind and deaf has met Pope Francis as part of her parents’ “visual bucket list.”  The aim of the list is for her to see a range of people and things while she still is able to.

Elizabeth “Lizzy” Myers and her parents, from Ohio, were given special seats at the Pope’s general audience in St Peter’s Square, where the Pope spoke to them briefly on Wednesday.

“She was awestruck. She just teared up,” her mother Christine Myers, who is Catholic, told reporters afterwards. “To her he’s the big guy in the white hat. He asked us to pray for him and told us he would pray for us.”

Lizzy is not aware that she is suffering from Usher’s Syndrome, which will eventually leave her deaf and blind.  Her case has received huge media coverage in the United States.

Lizzy, who already wears a hearing aid, will be told about her condition by her parents as she gradually asks questions as she grows older.

She could be blind in about seven years, so her parents have started what they call a “visual bucket list” of sites and people they think she should see while she can.

One of the experiences at the top of the list was seeing the Pope.  Lizzy also saw the Colosseum and other monuments in Rome.

“I feel like I have very little time to show her so much,” her father, Steve Myers, said.

An airline recently offered them the round-trip tickets to anywhere in the world after reading about Lizzy’s case.  The family chose Rome for the experience.

Lizzy gave the Pope a piece of a meteorite she was given when she was a special guest at the Warren Rupp Observatory in Mansfield, Ohio, one of the first places on her parents’ list.

Her mother said she and her husband wanted to make sure that she also saw simple things while she could, “like bonfires and fireflies”.