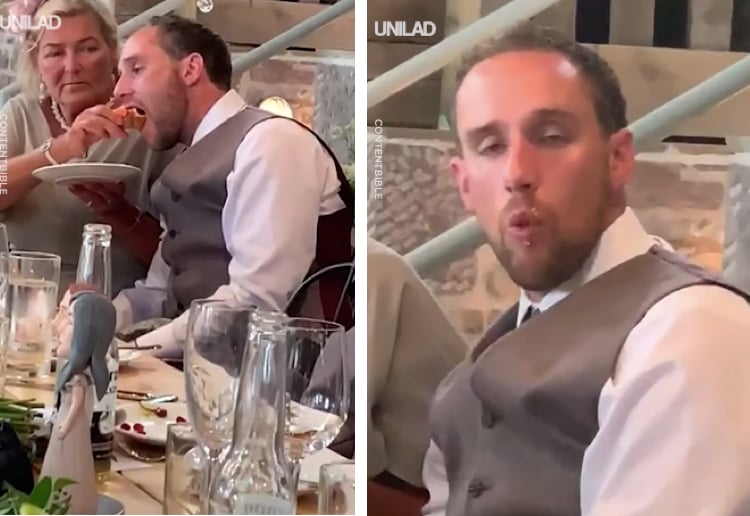 How mortifying. You would think that a married couple would be on their best behaviour on their wedding day. But this groom clearly went a bit overboard and his mother-in-law was left to pick up the pieces.

A video taken at a wedding, believed to be in Scotland, features a very intoxicated groom, being hand-fed by his new mum-in-law.

A wedding guest captured the amusing moments and was shared by UNILAD, before being flung around the internet.

In the ornately decorated reception room, the video showed the groom’s new mother-in-law picking up food from a plate and popping it into the grooms’ mouth, perhaps in an effort to sober him up.

The noticeably drunken man, dressed in his wedding suit, seemed unable to lift his own arms and dozily chewed on the food offered by his MIL.

The MIL is clearly annoyed by the inappropriate actions of her daughter’s new hubby and she looks furiously into the camera while offering a sarcastic thumbs-up.

The groom looked like he was barely keeping his eye open as he turned towards the camera showing food smudged all over his beard. What a grub!

The new wife doesn’t appear in the video at all so one wonders whether her inebriated new hubby is in the dogbox with her, or perhaps she’s getting just as drunk on the opposite side of the room? 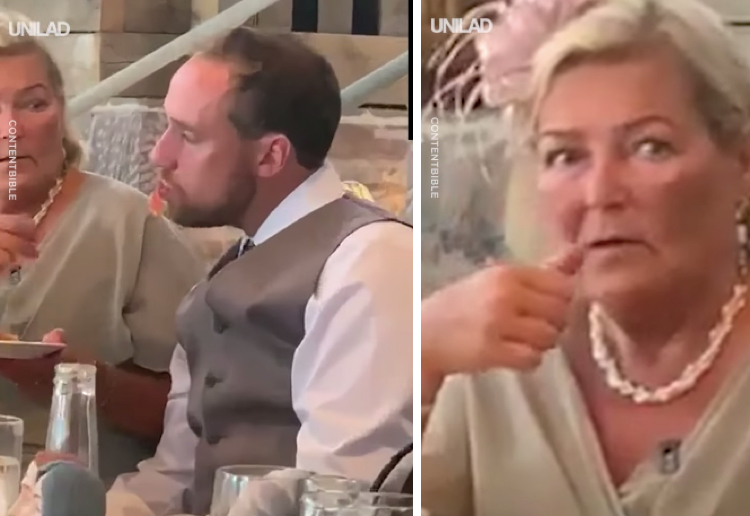 The funny video has attracted thousands of comments.

One person wrote: “Best mother in-law of the year.” Although another quipped in reply: “That title has never and will never exist”.

Another commented: “All I will say is that he has an amazing mother in law!! The fact that she is feeding him is so sweet. If that was my mum she would have sorted him out (no feeding involved)”

He Ruined Their Special Day

However, not all the commenters were amused some saying that he’d probably “ruined” the day with his behaviour.

“Isn’t she a lucky bride, not. It’s meant to be the happiest day and night of your life.
Nice wedding day and night she had. I would be gone in the morning when he sobered up and divorce papers would be served to him shortly after. Why some women accept this is beyond me.”

“Getting into that state on your wedding day is recipe for disaster for the marriage…..so disrespectful”

Others slammed the drunken behaviour as “sad”, “stupid”, “awful” and “insulting”.

It Happened To Me Too…

For some, this video was all too familiar and some viewers have shared stories of their own calamitous wedding stories.

“My husband got so drunk he barfed all over the honeymoon suite, slipped and cracked the tiles in the shower, temporarily lost his wedding ring and passed out before we consummated the marriage..I found it bloody hilarious tbh. made up for it the next day with candles, rose petals and dinner, 9 months later we had a baby so we say it was meant to be.”

And another revealed: “I got this close at the end of the night at my wedding lol. To quote Deadpool. “Stupid, worth it” wife had a great time I’m told I had a great time still married lol”

Have you ever had a drunken embarrassing incident? Share in the comments below.

Are Honeymoon Funds Asking Too Much?