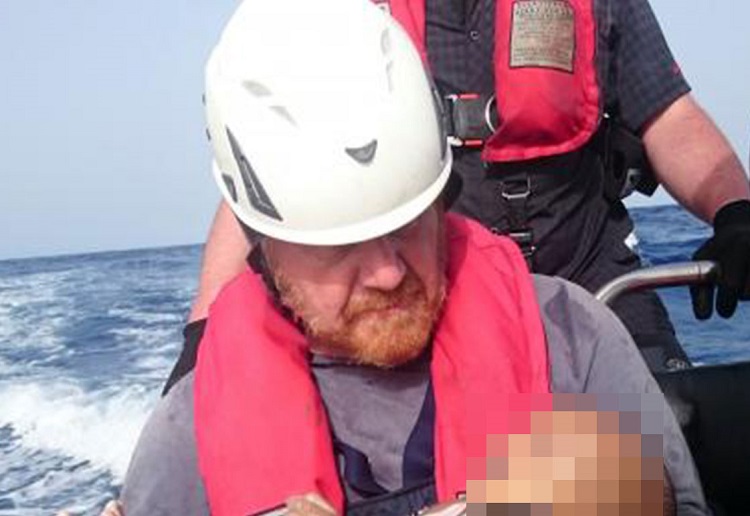 A HEARTBREAKING photograph of a drowned migrant baby in the arms of a charity worker goes viral.

The baby, who appears to be no more than a year old, was pulled from the sea off the coast of Italy on Friday after a wooden boat capsized reports Reuters.

German rescue organisation Sea-Watch, operating a rescue boat in the sea between Libya and Italy, released the picture taken by a media production company on board, in a bid to convince European authorities to ensure the safe passage of migrants.

In an email, the rescuer, who gave his name as Martin, said he had spotted the baby in the water “like a doll, arms outstretched”.

He said: “I took hold of the forearm of the baby and pulled the light body protectively into my arms at once, as if it were still alive … It held out its arms with tiny fingers into the air, the sun shone into its bright, friendly but motionless eyes.”

The rescuer, a father of three and by profession a music therapist, added: “I began to sing to comfort myself and to give some kind of expression to this incomprehensible, heart-rending moment. Just six hours ago this child was alive.”

More than 7,000 people have died in the Mediterranean since the start of 2014.

Sea-Watch collected around 25 other bodies, including another child, according to claims from the crew seen by Reuters. The Sea-Watch team said it unanimously decided to publish the photo.

They said: “In the wake of the disastrous events it becomes obvious to the organisations on the ground that the calls by EU politicians to avoid further death at sea sum up to nothing more than lip service.

“If we do not want to see such pictures we have to stop producing them.”