Article Heinz under fire for its toddler snacks 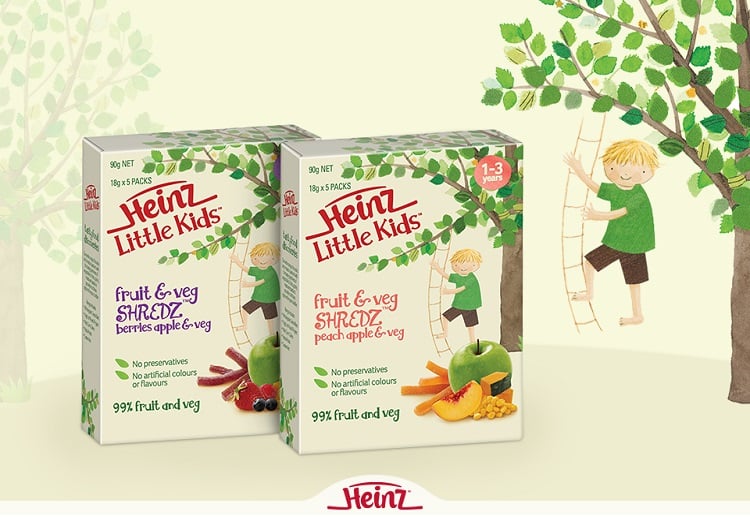 Heinz to face court for promoting its sugary Shredz toddler products as healthy.

The Australian Competition and Consumer Commission has started legal proceedings in the Federal Court against H.J. Heinz Company Australia Ltd in relation to the food snacks marketed to one-to-three-year-olds.

It alleges Heinz is falsely marketing these products as healthy options for young children, when they are not.

In a statement, Heinz said it strenuously denied the ACCC allegations and looked forward to defending it’s position, reports 9 NEWS.

“Heinz takes labelling of products very seriously and compiles with all Australian labelling and food laws,” it said.

The Shredz product range includes three varieties – peach apple and veg, berries apple and veg, and strawberry and apple with chia seeds – and has been available in major supermarkets nationally since at least August 2013.

They are predominantly made from fruit juice concentrate and pastes.

“These products contain over 60 per cent sugar, which is significantly higher than that of natural fruit and vegetables – for example, an apple contains approximately 10 per cent sugar,” ACCC chairman Rod Sims said.

The ACCC also alleges the Heinz Shredz products are likely to inhibit the development of a child’s taste for natural fruit and vegetables.

Particular issue has been taken with the products’ packaging, which features prominent images of fresh fruit and vegetables and statements such as ‘99% fruit and veg’.

Mr Sims says major companies have an obligation under the Australian Consumer Law to ensure products’ health claims do not mislead the public.

The legal action has been roundly welcomed by dieticians and obesity prevention advocates, including the Obesity Policy Coalition (OPC).

“The OPC is pleased to see such strong action from the ACCC against Heinz for potentially misleading parents who are simply trying to do their best to feed their children nutritious food,” OPC executive manager Jane Martin said.

“It’s very difficult for parents to know which foods are healthy and which aren’t, particularly for toddlers. I think parents are really trying to make the right choices and they need good, clear, honest information about the nature of the products,” Ms Martin said.

“Many parents would be shocked to know that just one 18g serve of Shredz contains almost an entire day’s worth of added sugar for a two-year-old.

Paediatric dietitian and nutritionist Hanan Saleh agrees, and says packaged snacks, like Little Kids Shredz, are not a healthy alternative to a piece of fruit.

When it comes to making healthy food choices for children, Ms Saleh says parents really need to go back to basics or “paddock to plate”.

“Parents should always think twice before picking up anything in packages,” Ms Saleh told AAP.