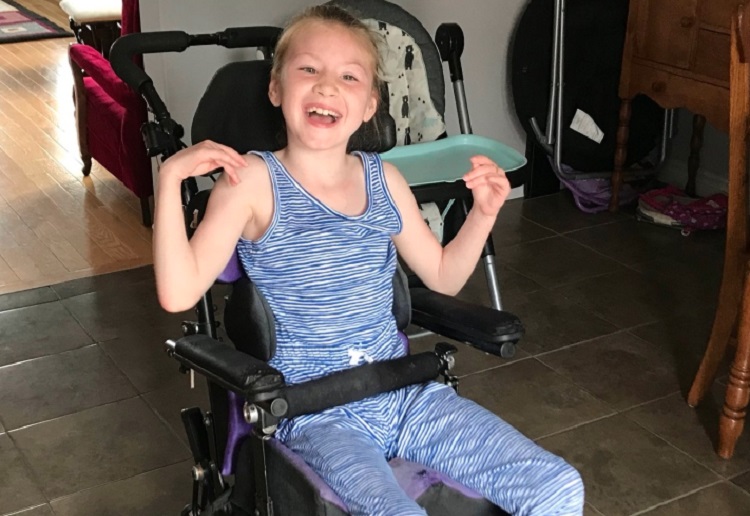 The nine-year-old is being hailed as a hero after she alerted her family that her 18-month-old brother, Leeland, was in danger.

Lexie’s mother, Kelly Jackson, and her grandmother, Nancy Comeau-Drisdelle, were busy preparing for Lexie’s birthday party when Leeland slipped out of sight.

“Running back and forth trying to make the food, and bring stuff outside and inside and [Leeland] was napping at the time,” Kelly told CTV News. “So then I thought OK, he’s up, I’m going to run upstairs and get changed. Mum brought him downstairs for me, we didn’t communicate the door isn’t locked.”

Leeland’s grandmother says she turned her back for “‘just a few seconds,” during which time the toddler opened the patio door and closed it behind him.

As Lexie, who has cerebral palsy, watched her brother head towards the pool, she began screaming from her wheelchair, shares yahoo 7.

“She’s yelling and she’s pointing at the door and I realise Leeland’s not with her,” recalled Nancy.

She ran outside but couldn’t see the toddler – he had already fallen in the pool.

“We had just refilled the pool, it was freezing cold and we had the tarp on it,” she said. “He was right by the edge and I took him out.”

Leeland began coughing up some water and was taken to hospital as a precaution.

“I hugged her, I cried, and I still thank her every day,” said Kelly, speaking about how thankful she was for Lexie. “Because honestly, in that matter, two seconds makes a huge difference.”

Immediately after the incident, the family installed a locked fence around the pool.

“You don’t need to be able to walk and talk, and have all your senses,” said Nancy. “You can still make yourself heard and you can still help. And yes, she did save his life, you know.”

Lexie’s heroic actions have earned her awards and recognition from the Halifax Regional Police. She will be recognised later this week.