Article How can a MAKE-UP tutorial lead to ‘child abuse’ accusations? 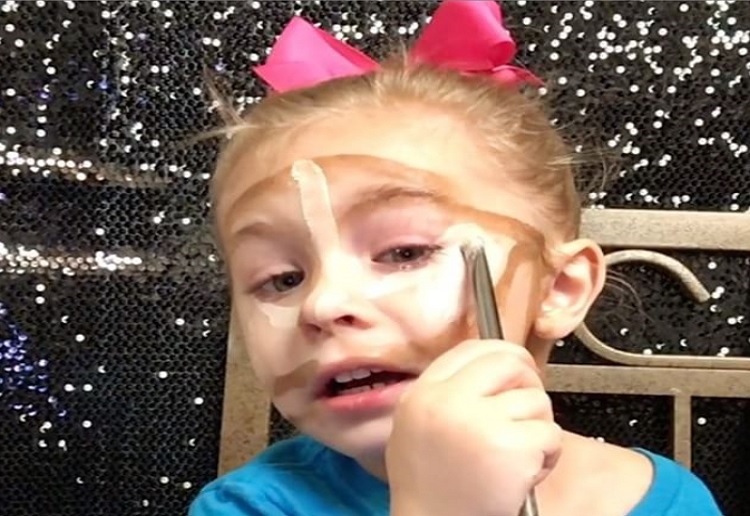 ‘I was really shocked to receive such cruel comments,’ said Courtney, who says five-year-old Molly is a ‘talented’ make-up artist.

‘One commented that my daughter was fat and that I should be spending more time teaching her how to eat healthily.

‘Another said that I should die for letting them play with make-up and accused me of child abuse.

‘I was disgusted. I’ve always taught my daughters to love everyone and that it doesn’t matter about hobbies, skin colour or religion- just be you.

‘It saddened me to see that people were commenting without knowing or caring how it would make us feel,’ said the mum-of-two, who started filming her own make-up tutorials in February, and said she has 38,000 supportive followers.

‘The girls were really interested in what I was doing,’ she said.

‘In May, I decided to let Molly and June record their own little make-up videos just for fun.

‘They played around with the make-up and pulled faces at the camera, before I removed it all with coconut oil.’

‘I don’t think there’s any harm in young girls wearing make-up, just as long as they know they are beautiful without it.

‘I won’t be allowing them out of the house with full make-up on until they’re mature young ladies.

‘For now, both of my girls just like to play with it for fun.

‘They have been brought up not to judge others and I can only hope that internet trolls can learn to do the same.’

Why do people continue to be so nasty behind a computer screen? It is NEVER acceptable, no matter how public a post or persons profile. You don’t have a right to be so cruel. Bite your tongue!

Do you see an issue with these tutorials?