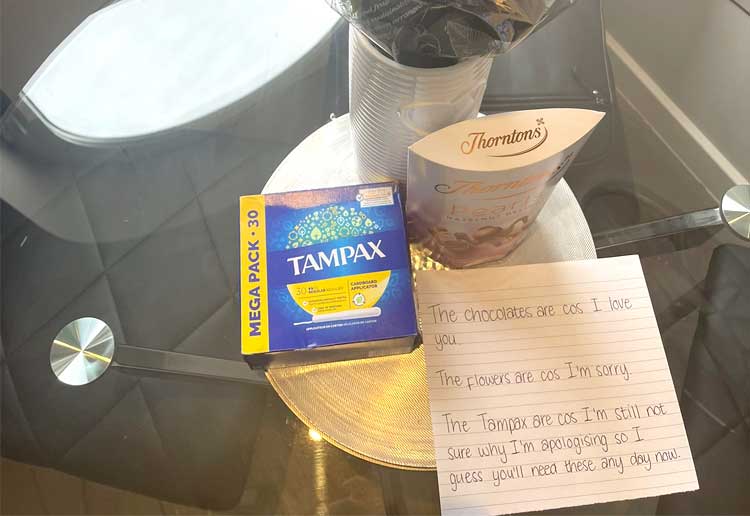 A man has decided to dice with death, by apologising to his wife with flowers, chocolates and a box of tampons.

Jack Sullivan, from Essex, uploaded a photo of his apology gifts to Twitter, captioning the image, “Went (to the) pub) last night and come home and had a bit of an argument with the missus. I’ll be the bigger man and apologise …”

The image shows a bunch of roses, some chocolates, a box of tampons and a note, which reads:

“The chocolates are cos I love you.

The flowers are cos I’m sorry.

The Tampax are cos I’m still not sure why I’m apologising to I guess you’ll need these any day now.”

Went pub last night and come home and had a bit of an argument with the missus.

I’ll be the bigger man and apologise.. pic.twitter.com/tLhSUVWpTL

It appears Jack enjoys living on the edge, because not only did he leave the gift, he decided to upload it all to social media, where his photo went viral.

The Tweet attracted hundreds of comments, with many understandably concerned about Jack’s fate:

“And he was never seen again. Have a great after life.”

Jack has actually been Tweeting since he uploaded the image, so we’re sure he’s perfectly fine. For now.

How would you react if your partner left you this note? Let us know in the comments below.